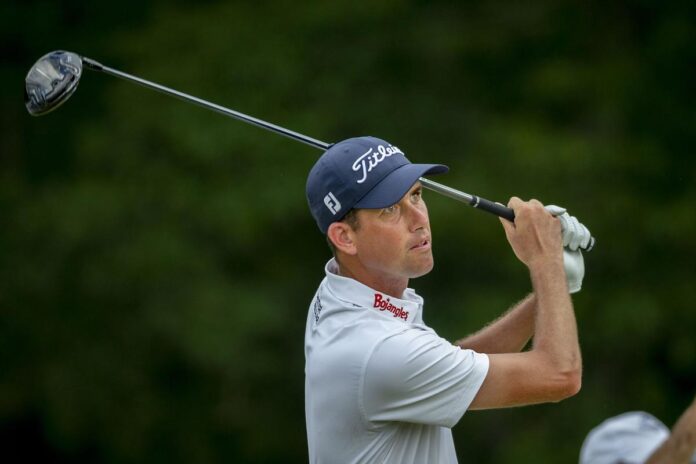 The Palmetto Championship at Congaree is Chesson Hadley’s to win, or lose.

The 33-year-old Hadley, who led by two strokes after 36 holes, hit his drive into the fairway on the 18th hole in round three before the horn blew because of a thunderstorm in the area and held a four-stroke over Harris English at Congaree Golf Club in Ridgeland, S.C.

Hadley, English, Dustin Johnson and Tain Lee will return on Sunday morning to complete the third round before the final round begins.

After making his only bogey on the first hole, Hadley steadied himself and carded four birdies in five holes through No. 16, and after opening rounds of 65-66 was 3-under for the day when the end came in round three.

“It was starting to get a little bit kind of fuzzy when DJ and I were on 16 tee and we got through 16 and 17, once we got to 18 we kind of felt the wind pick up, the temperature change,” said Hadley whose only PGA Tour victory came in the 2014 Puerto Rico Open. “So it was getting close, but still thought we would finish. But they called it. I’m from the South, so when it starts, it doesn’t stop until everything starts to cool off a little bit.

“I was really uncomfortable to start, absolutely, I was nervous. And then I made a really, really nice putt on No. 6 for par and I was kind of, I kind of felt really good after that.

So I started to string some nice holes together and just, it was, you know, it was hard, it’s hard out there, it’s firm and fast and this course has held its own. I was able to make a few birdies there towards the end.

“We’re going to start early tomorrow. I think I’ve got probably a 9-iron or a wedge (into the 18th green) tomorrow morning when we start, and hopefully I can hit one in there stiff and get one more (birdie).”

English, who was 4-under for the day with four birdies and a lone bogey on No. 17, drove into the fairway and hit his second shot on to within 10 feet on the final hole before play was halted for the day.

“I never really had any back injuries before I had to pull out of The Players, and I haven’t been 100 percent since then,” said English, who won the Sony Tournament of Champions to start this year for this third PGA Tour victory.

Top-ranked Johnson had three birdies and four bogeys until the end came before he could hit his tee shot on the 18th hole and was six down in a tie for fourth with left-hander Garrick Higgo of South Africa, playing in the tournament on a sponsor’s exemption, who collected four birdies on the back nine in a 68.

Tyrrell Hatton of England, trying to climb back into the top 10 of the World Golf Rankings after slipping to No. 11 this week, holed out for eagles from 62 yards at No. 15 and from 107 yards on No. 16 to shoot 67 and is seven shots back in a tie for fifth with Bo Van Pelt, who made a two-foot eagle putt at No. 4 in a 66 that was low score of the day.

Lee, who led the lead for much of the third round until making three bogeys and a double bogey coming home and was 1-over while waiting to putt on the final hole and was seven down in a tie for seventh with Danny Lee of New Zealand (67), Luke Donald of England (67), Jhonattan Vegas of Venezuela (69), Doc Redman (70), Pat Perez of San Diego (71) and Seamus Power of Ireland (71).

Lee, from San Juan Capistrano and the 2010 NCAA Division III champion at Claremont-Mudd-Scripps College, is No. 1,882 in the world and qualified for the Palmetto Championship when qualifying was moved to last Sunday because of U.S. Open Qualifying on Monday.