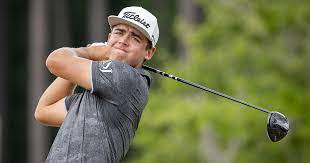 Left-hander Garrick Higgo of South Africa was playing in the Palmetto Championship at Congaree on a sponsor’s exemption, and incredibly wound up winning.

The 22-year-old Higgo, playing in only his second PGA Tour event, closed with a 3-under-par 68 to win by one stroke over six players at Congaree Golf Club in Ridgeland, S.C.

Chesson Hadley, who led for much of the last three rounds, was ahead by two strokes before making bogeys on the last three holes to cap a 75 and wound up in the tie for second.

“I mean, it’s just amazing,” said Higgo, who has won three times on the European Tour, including two events in the Canary Islands in the last couple months before tying for 64th in the PGA Championship. “The first things is, I’m just happy not to be going into a playoff right now, and I’m lucky that my Mom (Susan) was here to see things.

“I’ve been working hard on my swing and my putting, and it’s all just paid off. I just stayed patient all week. I’m ready to take all the good things that come with this. “I’m sure the rest of my family is going to be coming over here now to watch me play.”

Higgo, who has won seven times as a pro since leaving UNLV, made two birdies and two bogeys on the front nine before sinking a nine-foot eagle putt at No. 12 and a 23-foot birdie putt on a flawless back nine to finish at 11-under 273 after his third 68 of the tournament to go with a 69.

By winning, Higgo earned a two-year exemption on the PGA Tour and a spot in the Masters next April.

Hadley, who started the final round with a four-shot lead in search of his first victory since the 2014 Puerto Rico Open, tied for second with Hudson Swafford (66), Doc Redman (67), Jhonattan Vegas of Venezuela (67), 11th-ranked Tyrrell Hatton of England (68) and Bo Van Pelt (68).

“I can only imagine what it looked like on TV because it looked freaking awful from my view,” said Hadley, who missed the cut in his last five events and 10 of the last 12. “I mean, I could barely keep (my golf ball) on the planet.”

Ryan Palmer collected eight birdies in a bogey-free 64 that equaled the low score of the day and finished two down in a tie for eighth with David Lipsky of La Canada Flintridge, who made five birdies on the front nine in a 67.

Top-ranked Dustin Johnson, who was in the hunt until a wild drive led to a triple-bogey 7 on the 16th hole, totaled 70 and was three strokes behind in a tie for 10th with Matt Fitzpatrick of England (66), Erik van Rooyen of South Africa (68) and Pat Perez of San Diego (69).

Patton Kizzire, who was tied for the lead after making three straight birdies through No. 4, carded four bogeys and a double-bogey 6 (at No. 18) to shoot 40 on the back nine, finishing with a 76 to wind up in a tie for 14th that included Tain Lee of San Juan Capistrano and Claremont-Mudd-Scripps College, who led during third round before finishing 71-71.