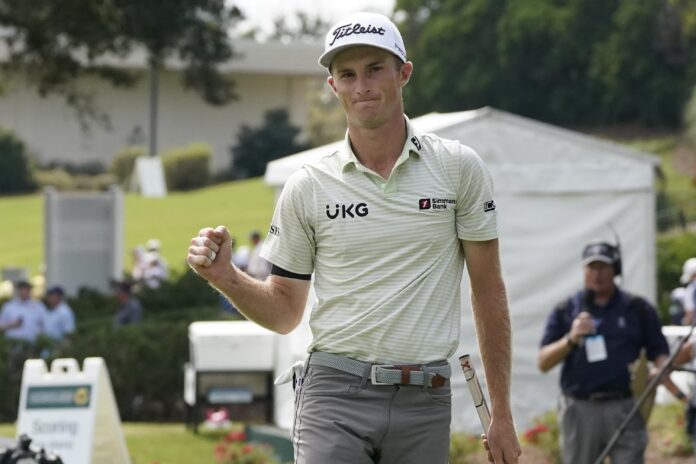 Will Zalatoris didn’t win a tournament while claiming the PGA Tour Rookie of the Year Award in 2020-21, but he’s put himself in position to claim that first title.

The 25-year-old Zalatoris (pictured), who was born in San Francisco and grew up in Plano, Texas, carded a bogey-free, 11-under-par 61 and is tied for the lead with Nick Watney of Davis and Fresno State, and Sahith Theegala of Chino Hills and Pepperdine midway through the Sanderson Farms Championship at the Country Club of Jackson in Jackson, Miss.

“The days where I make 20-footers, those are the days that I end up putting a great round together, because I’m always going to be the guy who’s going to hit 14 plus greens to give myself chances,” said Zalatoris, whose only pro victory came in the 2020 TPC Colorado Championship.

“I’ve gotten asked a lot, ‘What are your goals for this year?’ And besides winning a golf tournament, I really don’t have any.’ Of course, everyone has goals of trying to be on a Ryder Cup or a Presidents Cup. I would be lying if I said I don’t have a little fire in my belly after missing out and watching guys that I grew up with playing as a part of Team USA.

“It didn’t seem that stressful today. That sounds really stressful, but it wasn’t that stressful. For the most part I kept it in the right spot on the greens and I made a few kind of bonus putts that you might not expect to make. So those are always fun.”

Zalatoris, who played college golf at Wake Forest, started at No. 10 and birdied three of the first five holes among five birdies on his front nine, and then birdied six of nine holes while finishing on the front nine and recording a 36-hole score of 13-under 131.

Watney, 40, birdied four of the first six holes en route to a 66, while first-round leader Theegala, a PGA Tour rookie, holed out from 39 yards for an eagle on the third hole and sank a 29-foot birdie putt on No. 18 to follow his opening 64 with a 67.

“During the break, I had to be honest with myself assess what I wanted from golf moving forward,” said Watney, who has won five times on the PGA Tour, but not since The Barclays in 2012. “I decided that I still enjoy playing and I want to keep going.

“So I went back to work and so far, so good. I putted phenomenally today, kept it simple out there so far and have played well. I still enjoy playing and I’m going well, so I am looking forward to playing on the weekend.”

Cameron Young collected five birdies on each nine but had three bogeys in his 65 and is one stroke back in a tie for fourth with Hayden Buckley, who had seven birdies in another 65, while Sloan of Canada made two late birdies in at 67 and is two shots behind in solo sixth.

Aaron Wise of Lake Elsinore had seven birdies in a 66 and is one more down in a tie for seventh with Sam Burns and Henrik Norlander of Sweden, who both had bogey-free 66s, Stephan Jaeger of Germany, who also had a 66, Denny McCarthy, who had four birdies on each nine in a 65, and Kurt Kitayama of Chico and UNLV, who finished at 68.

Defending champion Sergio Garcia of Spain, the 2017 Masters champion, carded a second straight 70 and missed the cut by one stroke in a tie for 56th that included Gary Woodland, the 2018 U.S. Open champion, who had a 73.

Keegan Bradley, the 2011 PGA champion, shot 69 and missed the weekend by two strokes, and two-time major champion Zach Johnson had a 70 and missed the cut by four shots.