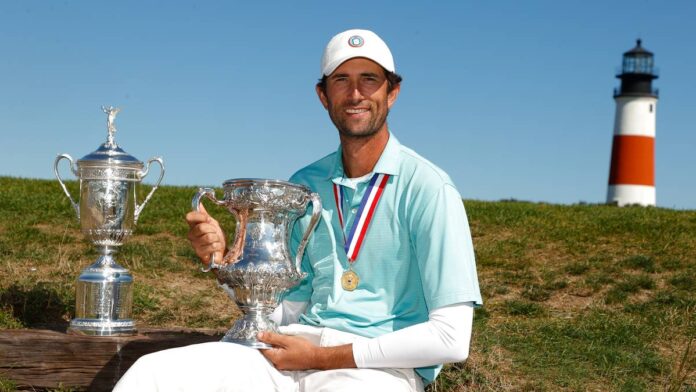 The 30-year-old Hagestad, from Newport Beach, held on to defeat Mark Costanza of Morristown, N.J., 2 and 1, in the 40th United States Mid-Amateur Championship at Sankaty Head Golf Club in Siasconset, Mass.

“(Costanza) gave me nothing the whole day,” said Hagestad, who also won the U.S. Mid-Amateur title in 2016 and has a 20-3 match play record in this championship. “I thought that at some point I would maybe get a break or he would give me a hole.

“I knew that he would come out swinging. He’s a really good player. I tried to go out and basically make him beat me, and he damn near did that. I’m speechless, and I can’t stop smiling. It’s something I’ve set as a goal for myself for a long time, and I’m thrilled.”

Hagestad, who played at USC and has been part of winning United States Walker Cup teams in 2017, 2018 and 2021, built a 7-up lead through 11 holes of the scheduled 36-hole final, but Constanza won the 12th and 17th holes of the opening 18 to stay within striking distance.

Constanza won the third and fifth holes of the second 18 with birdies and when Hagestad made a bogey at No. 6 his lead was down to 2 up. After both players parred the next six holes, Costanza got to within 1 down with a birdie on the 14th hole.

“It’s tough because when you’re digging yourself out of a hole, you want to make birdies, but you know if you falter, you’re going deeper into the hole,” said Costanza, who won the Ike MGA Stroke Play Championship and the New Jersey Golf Association Open in 2020.

“You’ve got to keep the momentum going. I think I kept the honor the entire day. I made some clutch up-and-downs and I’m proud of myself.”

In the semifinals, Hagestad defeated Hayes Brown of Charlotte, N.C., 4 and 3, while Constanza beat Nicholas Maccario of Haverhill, Mass., 2 and 1.