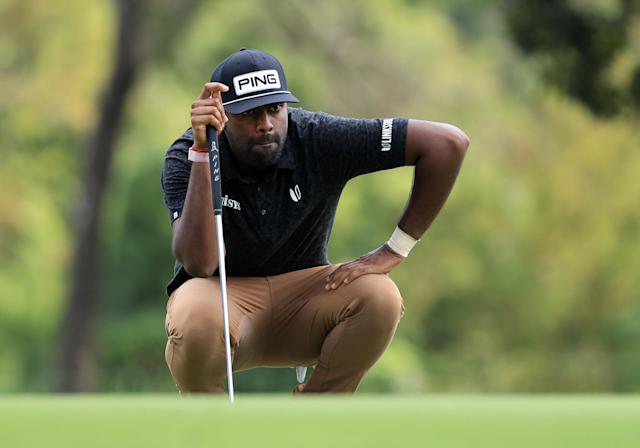 Sahith Theegala claims all it took was a new driver to turn his game around.

The 23-year-old Theegala, from Chino Hills and Pepperdine, shot 8-under-par 64 to take a one-stroke lead over Harold Varner III and Nick Watney of Fresno State and Davis after one round of the Sanderson Farms Championship at the Country Club of Jackson in Jackson, Miss.

“I got a new driver after I missed the first cut at Korn Ferry Finals, went to Ping, did a little bit of work there and they set me up with a new driver,” said Theegala, who earned the Haskins Award, the Ben Hogan Award and the Jack Nicklaus Award as the best men’s college golfer in 2020. “It’s a longer driver. I’m like, ‘If I’m going to hit it off-line, I might as well hit it a little bit further,’ and funny enough I’m hitting it way straighter.

“It was really stress-free … being back here a second time, I don’t feel like my game is that much different, I just feel like I’m making slow progress and that’s what me and my coach have been working on, make a little bit of progress. Even if it’s just .01 percent, just feel like you’re making progress.

Theegala, who finished fourth and sixth in the last two Korn Ferry Tour Finals events to earn his PGA Tour card, started at No. 10 in Jackson and birdied four of the first five holes before adding four more birdies on the last 10.

Watney, who has won five times on the PGA Tour but not since The Barclays in 2012, sank a 46-foot eagle putt on the third hole and birdied four of the last six holes in his 65, which Varner matched by making four of his nine birdies to start his back nine.

“I’ve been playing well the last few weeks and it just continued,” said Varner, who is seeking his first PGA Tour victory. “I played great and made some awesome putts. It was fun and it’s always a great time when you’re playing well.

“My wife is going to have a baby at any time, but that little guy is going to come out when he wants to, so my wife told me to just go out and play. It’s nice to have a supportive wife like that. I hope I have three more days and I’m looking forward to it.”

Said Watney: “I’ve never done well if I thought, ‘Oh, I have to shoot X-under. I think I do my best when I go out and try to play the shot in front of me. I know that’s super cliche, but that’s truly how I play my best. That’s what I was even trying to do today. Just to execute my best on that shot.”

Kurt Kitayama of Chico and UNLV had four birdies on his back nine in a bogey-free 66 and is tied for fourth with Si Woo Kim, who birdied the last two holes, and Roger Sloan of Canada, who sank a 22-foot birdie putt while finishing on the ninth hole.

Defending champion Sergio Garcia of Spain, the 2017 Masters champion, shot 70 and is in a tie for 50th that includes 2016 PGA champion Jimmy Walker and 2020-21 PGA Tour Rookie of the Year Will Zalatoris, while 2011 PGA champ Keegan Bradley is tied for 101st at 72, and two-time major winner Zach Johnson totaled 73 and is tied for 119th.