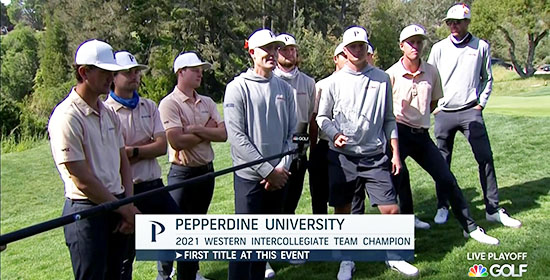 Joe Highsmith of Pepperdine claimed his first college title on the fourth playoff hole and led the Waves to the team championship by 11 strokes over Stanford in the 74th Western Intercollegiate at Pasatiempo Golf Club, designed by the legendary Alistair MacKenzie, in Santa Cruz.

“We’ve been trending upward, so this is big for us,” said Pepperdine Coach Michael Beard, whose Waves were No. 1 in the nation when the bulk of the 2020 season was cancelled because of the Coronavirus pandemic.

“We came in hoping to have our best stuff and it’s great to get out of here with the victory.”

All three made par on the first two playoff holes before Anupansuebai dropped out by driving into the weeds and making a double-bogey 6 on the third extra hole as Highsmith and Lundell again made pars.

After Lundell missed his par putt on the fourth playoff hole, Highsmith made a three-foot par putt to win.

“It was absolute craziness,” said Highsmith, who made clutch par putts on the final hole of regulation, and the second and third playoff holes to stay alive. “I made a bogey on No. 17 that was costly and didn’t even know where I stood on the last hole before making a clutch six-footer.

“I’m glad I was able to hang in there and handle my nerves well. It’s been awhile since I’ve been in that position. This is great. It’s so cool to win and it mean a lot to do it on this course.”