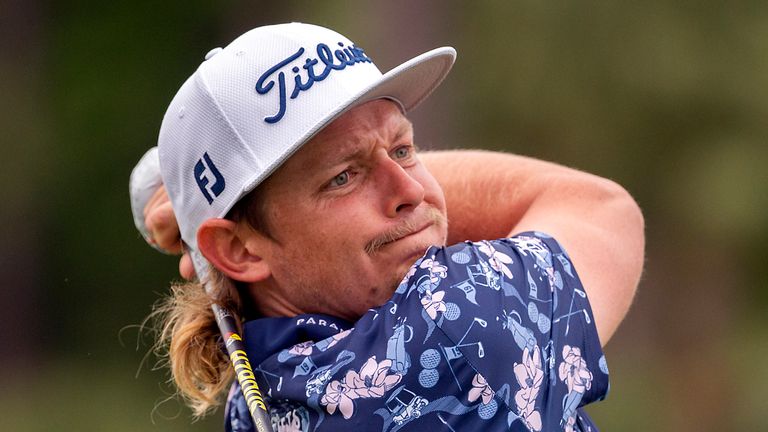 For Cameron Smith, it was simply a breeze on the shores Calibogue Sound.

The 27-year-old Australian posted a bogey-free, 9-under-par 62 to take a one-stroke lead over Stewart Cink after the first round of the RBC Heritage in windy conditions at Harbour Town Golf Links in Hilton Head Island, S.C.

“Everything just came together today,” Smith, who tied for 10th in the Masters last week after tying for second at Augusta last year, said after putting up his career-low round. “I hit my irons well, got a lot of good looks at birdie and took advantage. Chipping here is a breeze, compared to last week at Augusta, where it’s really scary, and I was really aggressive.

“I had a lot of perfect numbers and just felt confident on every shot, and it paid off. I was 100 percent into every shot and committed to the way the wind was supposed to be blowing, even though there were some different gusts.

Smith, who has won four times as a pro including the 2020 Sony Open in Hawaii most recently, played when it was windier in the afternoon and made five birdies on the front nine and four more coming home.

After holing a bunker shot 42 feet for birdie at No. 17 to pull even with Cink, Smith sank a five-foot birdie putt on the last hole to take sole possession of the lead.

“Just completely went to sleep at the wheel (at No. 10),” said Cink, who has won 14 times in his career and is coming off a tie for 12th in the Masters. “It was horrible. I had to hit lumber in on my third shot.

“The course hasn’t really changed that much. It’s been through a couple renovations, added a few tees here and there. It’s the same course for the most part. There is very little difference out there. It’s just a great course. The kind of course that stays the test of time because it has some innate defense against distance.”

“A round like this shows you what you’re doing is already dead on. Why change anything?”

Fourth-ranked Collin Morikawa of La Canada Flintridge and Cal had four birdies on the front nine and three on the last six holes in a 65 and is tied for third with Matt Wallace of England, who birdied four of his first six holes in a bogey-free round.

Billy Horschel chipped in for an eagle at No. 5 and made his lone bogey at No. 18 in a 66 and is tied for fifth with Charles Howell III and Harold Varner III, who both carded bogey-free rounds.

Corey Conners of Canada, who tied for eighth in the Masters, made two birdies down the stretch on his way to a 67 and is in a big tie for eighth with Brian Harman, Daniel Berger, Kevin Streelman, Mackenzie Hughes of Canada, Austin Cook, Lucas Glover, Tom Hoge and Kyoung-Hoon Lee of South Korea.

Top-ranked Dustin Johnson is tied for 46th at 70, while ninth-ranked Webb Simpson, the defending champion, shot 71 and is in a tie for 67th that includes 10th-ranked Patrick Cantlay of Los Alamitos and UCLA, and eighth-ranked Tyrrell Hatton of England is tied for 99th at 73.