Walker gets new intro at Waialae 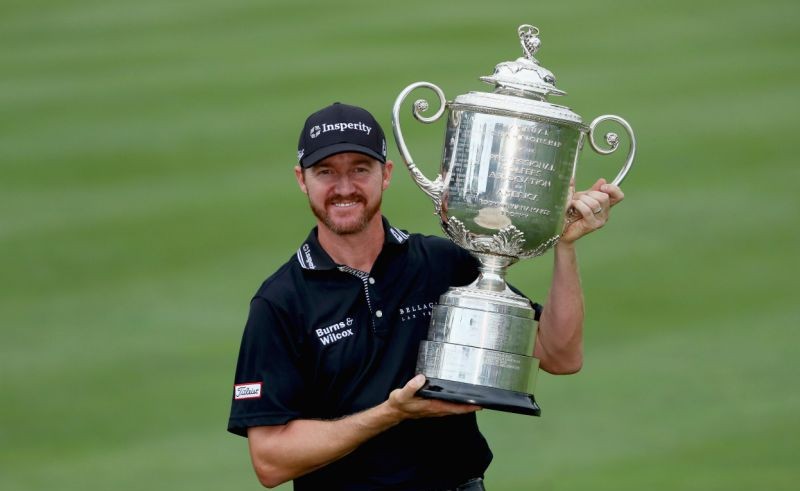 Jimmy Walker was introduced as the defending champion each of the past two years at the Sony Open in Hawaii.

Pretty cool, but the experience this week figures to be even better.

When he reaches the first tee on Thursday at Waialae Country Club in Honolulu, the on-course announcer will present Walker as the reigning PGA champion, having claimed his first major title last August at Baltusrol Golf Club in Springfield, N.J.

Carrying around the Wanamaker Trophy, which goes to the winner of the final major of the season, can have its ups and downs.

“It’s been cool; if I was smart I would take it everywhere with me,” said Walker, a journeyman pro who has claimed all six of his PGA Tour victories since 2013 after hooking up with famed instructor Butch Harmon. “People just throw stuff at you when you walk in somewhere with that thing. It’s too heavy, too big to lug around. It’s parked at home now.

“When Butch and I had dinner together (after his biggest victory), it was kind of a centerpiece on the table. I’ve done that a few times. Just to be able to do that with your friends and have it there and for everybody to experience it, enjoy it, it’s pretty special.

“I think with golf, there’s a lot of people that you have in your life that have kind of been on the journey with you and feel like they’re a part of it. Good friends and family and everybody, I think, feels like they’ve got a bit of a vested interest in what you’re doing because golf is pretty personal, and so just to be able to experience that and have (the trophy) there and on the table or just kind of gets strapped into a car seat here and there, or strapped into a plane somewhere.”

Walker, who turns 38 on Monday, held off top-ranked Jason Day, the defending champion, by one stroke to win the PGA Championship after the Aussie holed a 15-foot eagle putt on the last hole to get within one shot.

After missing the green, Walker scrambled to save his par with a knee-knocking 3-footer.

“Sometimes, things just don’t come easy,” Walker said after playing through a 36-hole day because of rain and finishing off what virtually was a wire-to-wire victory. “He really put it on me to make a par. Sometimes pars are hard. But we got it.

“It was amazing. It was a battle all day.”

Claiming his first major title, and at Baltusrol, was an experience that just kept getting better.

Especially the response from his fellow pros.

“I heard from a lot of guys, I really have,” said Walker, who has played on the last two United States teams in the Ryder Cup. “I’m talking about just about everybody.

“One of the coolest things I got was a handwritten note from Jack Nicklaus that was very nice, to go out of his way to do something like that. He actually did a video message, too, for me for a party at my club (Cordillera Ranch Golf Club in Boerne, Texas), where I play at because he did the golf course there, and that was very special, too.

“Just to be a part of the history of Baltusrol, lot of great players have won there, Jack did it twice. I’ve heard from a lot of guys, and it felt heartfelt, which was nice.”

A few years ago, nobody would have thought it was possible for Walker to win a major because he was winless on the PGA Tour since turning pro out of Baylor in 2001.

Three months after claiming his first victory on the circuit at the 2013 Frys.com Open, in his 188th PGA Tour event, Walker came to Waialae and closed with a 7-under-par 63 to beat Chris Kirk by one stroke.

A year later, he played the weekend in 62-63 to beat Scott Piercy by a whopping nine strokes in the 2015 Sony.

“Love Hawaii, love playing here, love the golf course,” said Walker, who also won three times on what is now the Web.com Tour and once on the PGA Canada Tour.

“You definitely come here and you feel good about it. I feel good about being here and being back, and I can get out and shoot the golf shots and see the holes again. You have good memories.”

Good, to be sure, but nothing like those from Baltusrol.