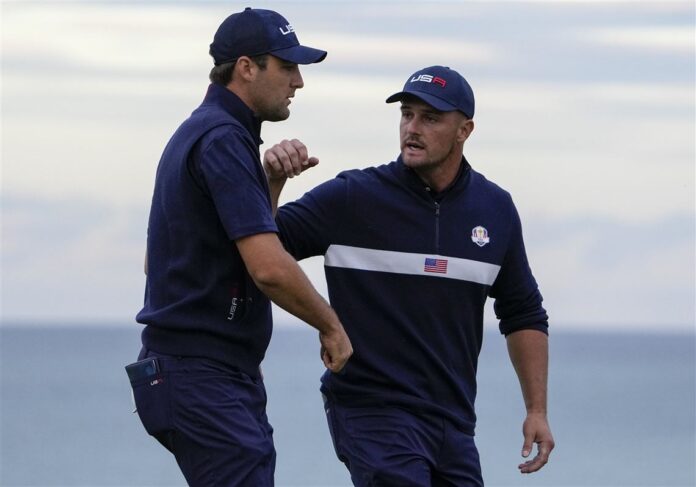 The United States held off a rally by Europe in the Saturday afternoon fourball session and will take an 11-5 lead into the final day of the 43rd Ryder Cup at Whistling Straits Golf Course in Sheboygan, Wis.

The Americans need only 3½ points (for a total of 14½) in the 12 Sunday singles matches to regain the Cup after losing four of the last five, while the Euros must earn nine points to finish at 14 to retain possession.

This is the largest lead any team has taken into the final day in Ryder Cup history and every American has won at least one match. Eight Europeans are winless.

The Euros were ahead in three of the four afternoon matches for much of the way, but seventh-ranked Bryson DeChambeau of Clovis (2-0) and Scottie Scheffler (2-0) (pictured) won the last four holes to claim a 3-and-1 victory over Tommy Fleetwood of England and Viktor Hovland of Norway.

That salvaged a 2-2 split in the afternoon after second-ranked Dustin Johnson went to 4-0 by teaming with third-ranked Collin Morikawa (3-0), the Open champion from La Canada Flintridge and Cal, for a 4-and-3 victory over Rory McIlroy of Northern Ireland and Ian Poulter of England.

“Bryson did such a great job, made three or four shots today that just switched things around,” said Scheffler, who has teamed with DeChambeau for a 1-0-1 record. “He made a couple of big putts on four and five, and the one he made on 14 to put us ahead was just massive.

“I made my share too, but that’s easy to do when you have a great teammate.”

Top-ranked Jon Rahm (3-0-1) teamed with fellow Spaniard Sergio Garcia (3-0) to beat 10th-ranked Brooks Koepka and Jordan Spieth, 2 and 1, while Shane Lowry of Ireland made a five-foot par putt on the last hole to pull out a 1-up victory over ninth-ranked Tony Finau (1-1) and Harris English (1-1) to help keep the Euros’ slim hopes alive.

“I contributed as much as I could, but mostly I watched Jon play like the No. 1 player in the world that he is,” said Garcia, who now has 25 victories, the most in Ryder Cup history. “He was just awesome.”

Said Rahm: “I just what was needed to do and hopefully our team can do that tomorrow.”

In the Saturday morning fourball matches, Johnson and Morikawa turned back Hatton and Paul Casey of England, 2 and 1; Justin Thomas (1-1-1) and Spieth (1-2) beat Hovland and Bernd Wiesberger of Austria, 2-up; while fourth-ranked Patrick Cantlay (2-0-1), the Fed Ex Cup champion, and fifth-ranked Xander Schauffele (3-0), the Olympic Gold Medalist, defeated Lee Westwood and Matthew Fitzpatrick, both of England, 2 and 1.

That gave the Americans a 3-1 record in each of the first three sessions and a 6-2 lead, with Rahm and Garcia claiming the Euros’ only point in the morning with a 3-and-1 victory over Koepka (1-2) and Daniel Berger (1-1).

“All the sessions are important, but we did a great job in the afternoon because they could have gotten right back in it with a sweep, and our guys battled and just didn’t let that happen,” U.S. Captain Steve Stricker said. “A 2-2 split in that session was a good outcome.

“But it’s not over yet and we have to finish it off tomorrow. We’ve not going to celebrate yet. They’re all going back to the hotel, and dinner and get a good night’s sleep.”

Said European Captain Padraig Harrington of Ireland: “Obviously, it would have been nice to win the afternoon session and cut into their lead, but we didn’t get it done even though we played well. Six points is going to be tough to make up tomorrow, but it’s not impossible.

“Jon Rahm has played like the No. 1 player in the world that he is, and Sergio is just amazing the way he plays in the Ryder Cup, but we need several others to step up tomorrow and we’ll see what happens.

“It’s a tall order, but our guys just have to play their own games and not look at the big picture.”

Stricker and Harrington announced the Sunday singles pairings on Saturday night: Schauffele vs. McIlroy; Cantlay vs. Lowry; Scheffler vs. Rahm; DeChambeau vs. Garcia; Johnson vs. Casey; Koepka vs. Wiesberger; Finau vs. Poulter; Thomas vs. Hatton; English vs. Westwood; Spieth vs. Fleetwood, and Berger vs. Fitzpatrick.