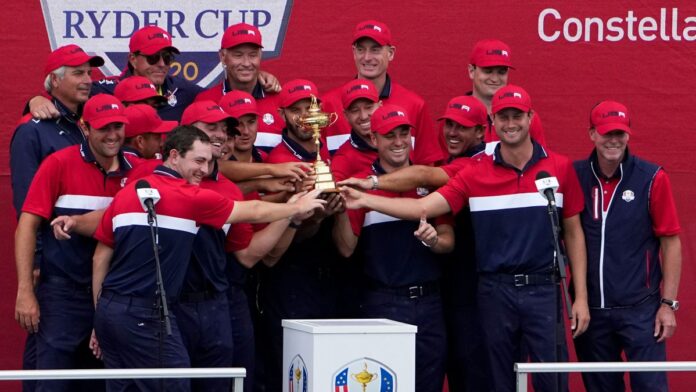 The United States rolled to victory in the 43rd Ryder Cup and Captain Steve Stricker said to get used to it.

The Americans regained the Cup for the first time since 2016 by routing Europe, 19-9, in the 12 singles matches on Sunday at Whistling Straights Golf Course in Sheboygan, Wis. The U.S. leads the series, 27-14-2, but the Euros had four of the last five.

It was the largest final margin in Ryder Cup history and the U.S. won all five sessions for the first time in 44 years.

“This is a new era,” said Stricker, whose six Ryder Cup rookies combined for a 14-4-3 record, while veteran Dustin Johnson went 5-0 in the three-day event. “These guys are young. They want it. They’re motivated. They came here determined to win. I could see it in their eyes.

“We put them in their groupings, communicated with them. There were no ra-ra speeches—am   I going to give them a ra-ra speech? They are the best in the world. This is very special, growing up a couple of hours from here, to be with these guys.

“I have never won a major, but this is my major right here.”

And they didn’t let up.

After Rory McIlroy of Northern Ireland scored his first point of this Ryder Cup by beating Olympic Gold Medalist Xander Schauffele of La Jolla and San Diego State, 3 and 2, in the first match out, the Americans went 5-0-1 in the next six matches to put the victory away.

Scottie Scheffler knocked off top-ranked Jon Rahm of Spain, who had been 3-0-1 this week, 4 and 3; Patrick Cantlay of Los Alamitos and UCLA beat Shane Lowry of Ireland, 4 and 2; Bryson DeChambeau defeated the winningest player in Ryder Cup history, Sergio Garcia of Spain, 3 and 2; Johnson edged Paul Casey of England, 1 up, and Brooks Koepka took care of Bernd Wiesberger of Austria, 2 and 1.

Collin Morikawa, the Open champion from La Canada Flintridge and Cal, provided the half point that clinched victory for the Americans when he tied his match with Viktor Hovland of Norway.

“It means so much, everything, wanting to make that putt,” Morikawa said of his putt on the 17th green. “It was a great match against Viktor.”

Said Cantlay, who finished with a 3-0-1 record: “I woke up this morning and I was trying to tell the guys, ‘Let’s get to 20 points,’ because this is going to be the next era of Ryder Cup team for the U.S. side.

“We’ve got a lot of young guys. I think they’re going to be on teams for a long time, and I wanted to send a message.”

Other U.S. singles victories came from Justin Thomas by 4 and 3 over Tyrrell Hatton of England, and Daniel Berger, 1 up over, Matthew Fitzpatrick of England, while Jordan Spieth tied with Tommy Fleetwood of England.

Europe’s only other singles victories came from 48-year-old Lee Westwood of England, 1 up over Harris English, and Ian Poulter of England, 3 and 2, over Tony Finau.

“It’s not just the strongest U.S. team I’ve seen, but they all played well this week,” Westwood said. “Everybody performed and turned up this week. Looks like they are a team.”

The Ryder Cup was scheduled for Whistling Straits last year and there was talk about holding it without fans because of the Coronavirus pandemic. The crowd this year definitely played its part in the U.S. victory.

The 44th Ryder Cup is scheduled for Sept. 29-Oct. 1, 2023, at Marco Simone Golf and Country Club in Guidonia Monticelio, Italy, outside Rome.