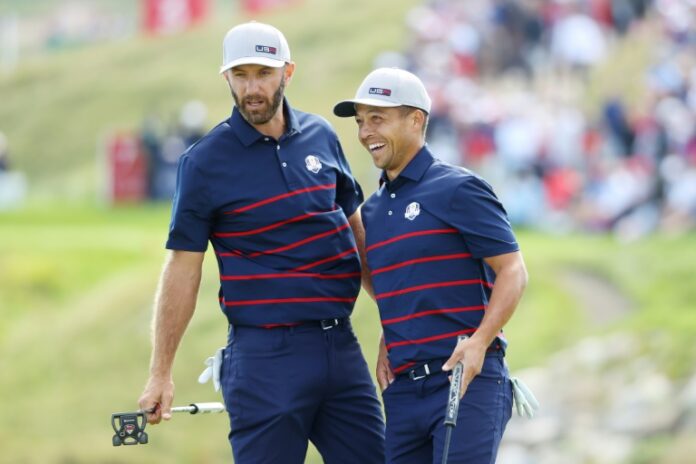 Second-ranked Dustin Johnson and fifth-ranked Xander Schauffele led the way as the United States built a 6-2 lead over Europe after the first day of the 43rd Ryder Cup in breezy conditions at Whistling Straits Golf Course in Sheboygan, Wis.

DJ and third-ranked Collin Morikawa of La Canada Flintridge and Cal defeated Paul Casey of England and Viktor Hovland of Norway, 3 and 2, in morning foursomes, when Schauffele, from La Jolla and San Diego State, teamed with Patrick Cantlay of Los Alamitos and for a 5-and-3 victory of Ryder Cup stalwarts Rory McIlroy of Northern Ireland and Ian Poulter of England.

Then Johnson and Schauffele got together for a 2-and-1 victory over Paul Casey of England and Bernd Wiesberger of Austria in the afternoon fourball matches as the Americans won both sessions in the same day for the first time since 2008 and the second time in 46 years..

“It was windy out there all day and the conditions were tough, but we hung in there and played well,” Johnson said. “It was really tough because of the wind, even on the greens, but we played well in both those matches.

“Xander and I have become friends and played together several times, and he’s a great teammate.”

Said Schauffele, the Olympic Gold Medalist who is one of six Ryder Cup rookies on the U.S. team: “It’s always great to play with DJ because he has such a great sense of golf. We’ve played together before and we know each other’s games.

“We just played free-flowing golf all day and it was great to win twice.”

In the other morning foursome matches, 10th-ranked Brooks Koepka and Daniel Berger turned back Lee Westwood and Matthew Fitzpatrick, both of England, 2 and 1, while top-ranked Jon Rahm and Sergio Garcia of Spain gave Europe its only point of the session by downing sixth-ranked Justin Thomas and Jordan Spieth, 3 and 1.

Ninth-ranked Tony Finau and Harris England defeated McIlroy and Shane Lowry of Ireland, 4 and 3, while fifth-ranked Bryson DeChambeau of Clovis and Scottie Scheffler tied with Rahm and Tyrrell Hatton of England, and Thomas and Cantlay halved their match with Hovland and Tommy Fleetwood of England in the other afternoon foursome matches.

Thomas and Cantlay, the FedEx Cup champion, were 3 down to Fleetwood and Hovland after eight holes, but rallied and pulled even when Thomas sank a 22-foot eagle putt from the fringe on No. 16 as they pulled out half a point.

McIlroy came in with a 11-9-4 record in five previous Ryder Cups and never before lost twice on the same day.

“I didn’t make very many putts today, so it was nice to make one on the last hole,” said Hatton, who sank a six-footer for a birdie on No. 18 as he pulled out the tie with Rahm. “It was an amazing feeling and hopefully it turns things around for us.”

Said Rahm: “(Hatton) hit an amazing drive, five-iron shot and six-foot birdie putt on the last hole when we needed it most. We had to have it and he came through for our team in a big way. I know we tied that match, but the way it happened felt like a win.

“It was huge for our team.”

“Obviously it was a tough day and we just didn’t make enough putts,” Euro Captain Padraig Harrington of Ireland said. “But we pulled out those two half points at the end that we could have lost, and there are still 20 points left to be determined.

“We’re going to battle like that right to the end.”

Said U.S. Captain Steve Stricker, a Wisconsin native:  “It was finally good to get things going and get off to a good start. You know, we’re trying to do that in every session, just win the session but when you can get off to that good a start, it’s definitely a bonus and have momentum on our side.

“It was an exciting day after such a long way. Our guys played great, but I told our guys not to get complacent and keep the pedal down tomorrow.”

In Saturday’s morning foursomes, Koepka and Berger will play Rahm and Garcia, Johnson and Morikawa will face Casey and Hatton, Thomas and Spieth will meet Hovland sand Weisberger, and Cantlay and Schauffele will take on Westwood and Fitzpatrick.

McIlroy will sit out a session for the first time in his Ryder Cup career.