Tringale 2-Up in Texas Open After Birdie Run 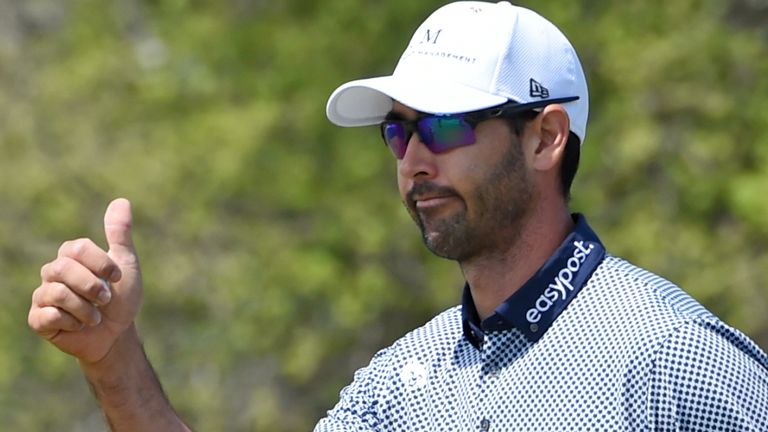 Cameron Tringale knew he was playing well, but didn’t stop to think about it.

The 33-year-old Tringale birdied five straight holes on the way to a 3-under-par 69 to take a two-stroke lead over Jordan Spieth and Matt Wallace of England midway through the Valero Texas Open on the AT&T Oaks Course at TPC San Antonio in San Antonio, Texas.

After starting at No. 10 and make bogeys on his first two holes, Tringale followed a par with five birdies in a row through No. 17.

“I knew I made a nice birdie on 13, a tough par 3, but then 14 was a pretty easy, easy hole today,” said Tringale, who is from Mission Viejo. “Then I just hit a lot of really good iron shots to those holes. I think my furthest putt was four feet after 13, so just good approaches to the green. Still gotta roll those in, but was able to do it. … I think when those things start to happen, you’re just kind of focused on where you’re at.

“But then I looked back and I thought, ‘Wow, that was five in a row,’ and I didn’t even birdie 18, which is probably the easiest of all of them. My takeaway was that it was a good day. I made a lot of birdies and took advantage of when I was in the fairway.”

Tringale, whose only PGA Tour victory came in a team event with Jason Day of Australia at the 2014 Franklin Templeton (now QBE) Shootout, finished with another bogey at No. 9 and recorded a 36-hole score of 9-under 135.

Spieth, a native Texan who finished second in the 2015 Valero Texas Open, bounced back from two bogeys early on the back nine with two birdies coming home in a 70, while Wallace had two birdies on each nine in a bogey-free 68.

“I’m really pleased with where things are at, but they’re not where I want them to be at,” said Spieth, who hasn’t won since the 2017 Open Championship at Royal Birkdale in Southport, England. “I’m trying to kind of take it slowly and patiently and reward myself, be excited about the good ones and not get too down about the bad ones.

“I thought the start was key for me, and I got off to a great start. I put some really good swings on the ball after kind of being a little sloppy at the end of yesterday’s round.”

Wallace, who has won four times on the European Tour but is seeking his first PGA Tour victory, said: “Whenever you go bogey free, whatever golf course it is, it’s nice, but especially here. I’ve been feeling comfortable about my game for a while now, just trying to hole a few more putts and keep the scoring going and making the right putts at the right time.”

Brandt Snedeker birdied his last two holes while finishing on the front nine and also holed out from 60 yards for an eagle at No. 17 to shoot 67, and is four shots back in a tie for fourth with Erik van Rooyen of South Africa and Kyle Stanley, who both totaled 68, and Kevin Stadler, who had three late birdies in a 70.

Defending champion Corey Conners of Canada shot 74 and is tied for 44th.