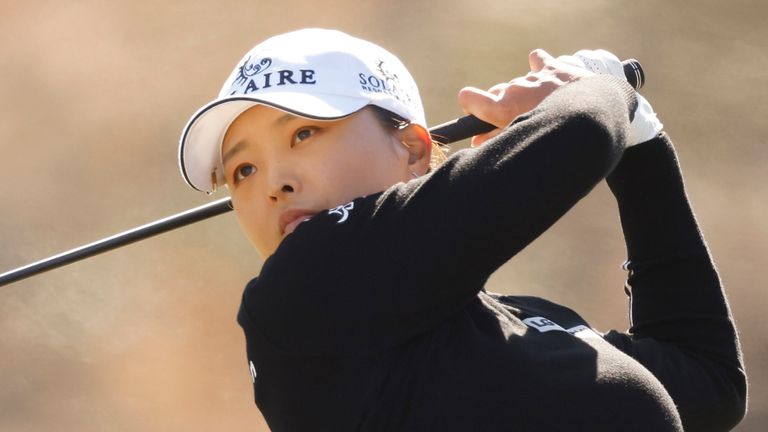 Top-ranked Jin Young Ko of South Korea also is on top of the leaderboard after two rounds of the CME Group Tour Championship, the final event of the LPGA Tour season.

The 25-year-old Ko, who won two major championships in 2019, posted a bogey-free, 5-under-par 67 to take a one-stroke lead over second ranked Sei Young Kim, also of South Korea, and Lexi Thompson in chilly conditions on the Gold Course at Tiburon Golf Club in Naples, Fla.

“World ranking is, my thinking, my opinion, is it’s just little things to play golf,” said Ko, who has won 17 titles as a pro, including six on the LPGA Tour. “So, if play good, I can do world ranking No. 1 still. But if not, yeah, and then (Kim) plays good, she can.

“ … Before when I play in KLPGA it was really cold, so I hate cold weather to play golf, but right now I love it.”

Kim, the defending champion who claimed her first major in the KPMG Women’s PGA Championship earlier this year and also has 17 pro victories, birdied four of the five four holes before cooling off and finishing at 69.

“But after, yeah, 4-under I got little, yeah, wasn’t feel good, and then I had two bogeys,” said Kim, who was 2015 LPGA Tour Rookie of the Year. “After that, little struggle with myself.

“ … Really exciting to chase the world ranking No. 1. So, yeah, I’m very look forward this weekend and it’s going to be fun.”

First-round leader Thompson, who has slipped to No. 11 in the world, started the second round slowly, but then birdied the 14th and 15th holes on her way to a 71.

“Every time I tee it up, I know I’m competing against the best,” said Thompson, who has 14 pro titles. “I haven’t been paired with (Ko and Kim), I don’t think ever in my career, so it’ll be nice. I like to play against great players.

“I’m looking forward to the weekend and hope to keep playing well.”

Hannah Green of Australia kick-started a 68 with three birdies on the first four holes and is two shots back in third, while fifth-ranked Nelly Korda collected seven birdies after making a bogey on the first hole and her 66 left her three behind in a tie for fifth with Cydney Clanton (68), Georgia Hall of England (69), Austin Ernst (69), Megan Khang (71) and Caroline Masson of Germany (71).

Lydia Ko of New Zealand, who won the 2014 CME Group Tour Championship, birdied the last three holes to cap a bogey-free 65 that was low round of the day and is tied for 11th.

Sixth-ranked Brooke Henderson of Canada shot 68 and is in a tie for 14th that includes eighth-ranked Minjee Lee of Australia, who had a 73, while third-ranked Inbee Park of South Korea put up a second 71 and is tied for 20th.