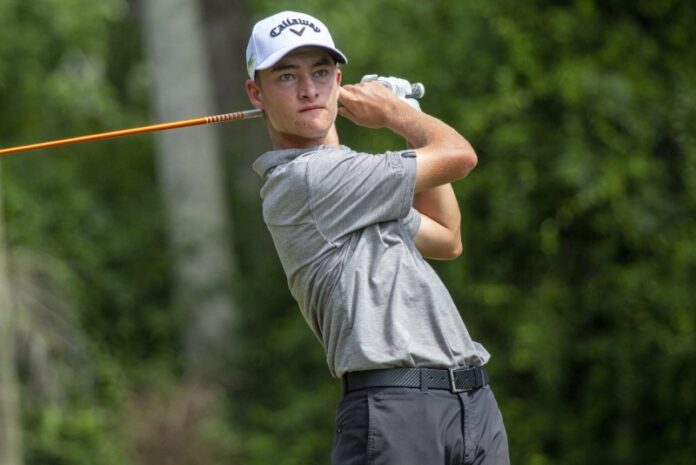 Sam Sommerhauser of Rocklin captured the 118th Northern California Amateur Championship with a 3-and-2 victory over Michael Slesinski of Fremont in the scheduled 36-hole final at Spyglasss Hill Golf Course in Pebble Beach.

Sommerhauser, a 19-year-old sophomore at the University of Arizona, claimed his first major amateur victory, taking the lead for good with a birdie on the fourth hole of the morning 18 and never relinquishing the lead.

“It’s by far the longest event I have ever played,” said Sommerhauser, who won back-to-back Transbay Invitational titles as a sophomore and junior at Irvington High School. “But I stuck to the process and kept hitting good shots when I needed to.

“It feels good. I know there are a lot of great players who have their name on the trophy. It feels great knowing my name will be on there with them.”

Slesinski, a graduate student at St. Mary’s College who reached the semifinals of the Southern California Amateur a week earlier, closed his deficit to 2-down with a quick win on the 19th hole and later made it 1-down on the 23rd hole.

However, Sommerhauser made birdie to take the 24th hole and was at least 2-up the rest of the way.

“I just made too many bogeys,” said Slesinski, who won the 2019 Concord City Amateur Championship. “I was playing behind all day and tried to force it in some areas. That’s not how you win match play.

“I had opportunities and just didn’t convert, and you have to do that against a good player. I just didn’t do it.”

In the semifinals, Sommerhauser turned back Jack Avrit of Arroyo Grande, 2 and 1, and Slesinski downed Maxwell Holm of Walnut Creek, 5 and 4.