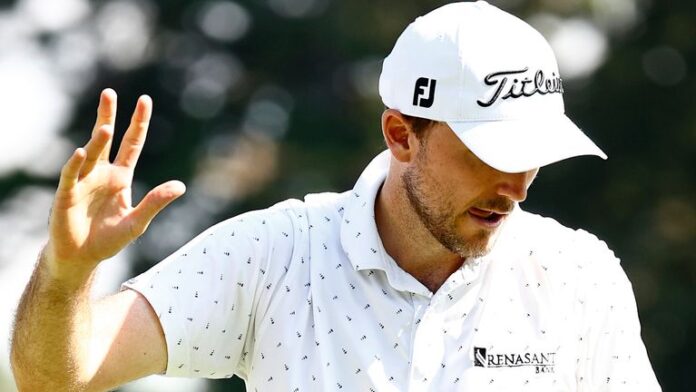 Russell Henley increased his lead, even though several players also went low behind him.

The 32-year-old Henley shot 6-under-par 64 to build a four-stroke lead over Rory Sabbatini of Slovakia, Webb Simpson and Scott Piercy midway through the Wyndham Championship at Sedgefield Country Club in Greensboro, N.C.

Henley, Sabbatini and Piercy all entered the week barely outside the top 125 places in the FedEx Cup standings and need to climb in to play in the first round of the playoffs next week in the Barclays, but all would make it with high finishes in the Wyndham.

“I came out of the gates a little tentative on my first two swings and made a great putt to start the day off with a nice par, so that was really huge,” said Henley, who opened the tournament with a brilliant 62 and is trying to win for the first time since the 2017 Shell Houston Open.

“Then just started feeling good with the putter, I feel like I hit it a little better today. Just a little more of a boring round and I had a really nice save on my 16th hole, No. 7, a good up-and-down for par. All in all, just kind of boring round, made some putts and had some good saves.

“I was a little frustrated after that early bogey because I thought I hit a good putt, but I know my game is good right now and just concentrated on every shot, and had another good round.”

Henley, who has won three times on the PGA Tour, started on the back nine and made his lone bogey at No. 12, but then carded four straight birdies through No. 17 and added three more on the back before making two clutch par saves by chipping close from 31 feet at No. 7 and from 23 feet at No. 9.

Sabbatini, the Silver Medalist in the Olympic Games, collected four birdies on the back nine to cap a bogey-free 64, while Simpson, the 2011 Wyndham champion, sank a 15-foot eagle putt on the fifth hole en route to a second straight 65, and Piercy made two birdies on each nine in a bogey-free 66.

“Over the last six weeks to two months, I’ve kind of been trending in the right direction with my golf game,” said Sabbatini, who has won six times on the PGA Tour, but not since the 2011 Honda Classic. “But golf, it’s weird how it doesn’t add up sometimes even though you’re always doing the right things. I think the final round in Tokyo maybe was the final key.

“I think I’ve always put too much pressure on myself on the golf course, being too hard on myself on the golf course, expected too much of myself, and I think maybe there I just took a step back and relaxed and somehow, it just seems to have clicked. This week I’m taking the same approach, and I think because of that, I’m not letting the bad shots affect me as much and just not putting as much pressure on myself.”

Justin Rose of England, who also is outside the top 125 and looking to climb in, sank a 12-foot eagle putt at No. 15 to highlight at 65 and is five shots back in a tie for fifth with Tyler Duncan, who posted a bogey-free 62 while playing on a sponsor’s exemption, and Brian Stuard, who finished at 66.

Kevin Na of Diamond Bar birdied three of his first four holes and four of the last six in a 64 and is six down in a tie for eighth with Alex Smalley, who also had a 64, Kevin Streelman, who totaled 66, and Tyler McCumber, who wound up at 67.