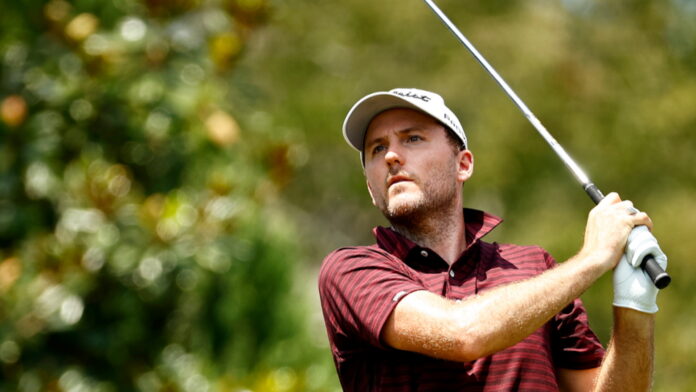 Russell Henley is guaranteed to make it to the Northern Trust that opens the FedEx Cup playoffs next week, but he’s looking farther down the road.

The 32-year-old Henley sank a 20-foot birdie putt on the last hole to card a bogey-free, 8-under-par 62 and take a two-stroke lead over seven players before play was halted by darkness in the first round of the Wyndham Championship in hot and humid conditions at Sedgefield Country Club in Greensboro, N.C.

Play was suspended for two hours because of thunderstorms in the middle of the day and darkness ended play for the day with 32 players still on the course.

“I want to make Tour Championship (in three weeks) and I want to win again,” said Henley, who has three PGA Tour victories, the last in the 2017 Shell Houston Open. “I haven’t won in a few years, so I feel like as well as I’ve been playing, I feel like I’ve underachieved a little bit.

“…Definitely glad it hit the hole (on No. 18). I lost a little focus there. I think everybody’s about to pass out at this point, it’s so hot. Growing up in the South, I guess I should be used to it. I just kind of things got going there. Keep attacking and keep trying to play a great round.

“I feel like I putted pretty well, made the putts I needed to make and made some par saves. Other than that, just, I don’t know, I feel like I played solid. My mindset is I feel if I can play my game, play my normal game, then I can maybe give myself a chance.”

Henley, who has four top-10 finishes and eight in the top-25 this season, sank a five-foot eagle putt at the fifth hole before making bridies on the next two, and then added four birdies on the back nine including three on the last four holes.

Chris Kirk and Scott Piercy both made eagles on the fifth and 15th holes to shoot 64 and are tied for second with Sung Kang of South Korea, who collected eight birdies, Ted Potter Jr., Michael Thompson, Hudson Swafford and Adam Hadwin, who was 6-under through 16 holes when darkness halted play.

Local favorite Webb Simpson, who won the 2011 Wyndham, made a double bogey-6 on the first hole but then birdied five of the next seven holes en route to a 65 and is in a big tie for ninth that includes Denny McCarthy, Scott Piercy and Nick Taylor of Canada—who all eagled the fifth and 15th holes.

Rory Sabbatini of South Africa, the Silver Medalist in the Olympics, shot 66 and is in a tie for 19th that includes Tommy Fleetwood of England, Sungjae Im of South Korea, Justin Rose of England, Adam Scott of Australia, Matt Kuchar, Branden Grace of South Africa and Padraig Harrington of Ireland, the European captain for the Ryder Cup.

Defending champion Jim Herman is tied for 143rd at 72.