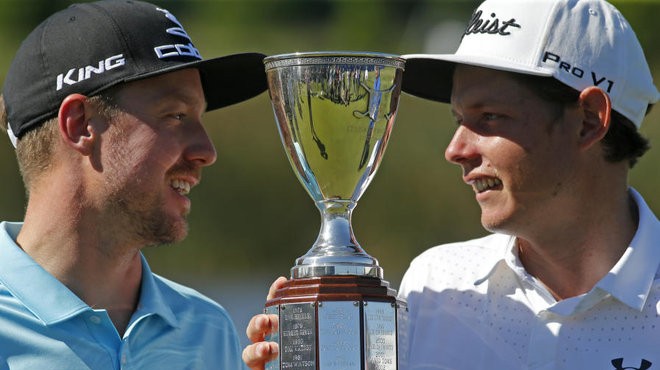 Cameron Smith had a hunch early in the week that he and teammate Jonas Blixt of Sweden could win the Zurich Classic of New Orleans.

The 23-year-old Australian made it happen when he hit his approach from 57 yards to within 2 1/2 feet and sank the birdie putt on the fourth playoff hole to turn back Kevin Kisner and Scott Brown on Monday morning at TPC Louisiana in Avondale, La.

“Inside a 100 (yards), I thought that it was my strong point in my game, and kind of because it was a strong point in my game, I just kind of let it go a little bit,” said Smith (pictured right), whose first PGA Tour victory earned him a spot in the Players Championship next week. “Really started working hard on that again this year, and yeah, to hit a shot like that under the pump, especially when you know you’ve got it, was pretty cool.

“To have a putt to win on the PGA Tour, when you’ve been working toward it your whole life, is a completely different feeling. It felt like the longest 2 1/2-foot putt I’ve ever hit.”

Kisner forced the playoff with a miracle hole-out from 95 feet for an eagle on the last hole of the final round in near-darkness on Sunday night, capping a 12-under-par 60 that pulled him and Brown even with Blixt and Smith, who closed with a 64 as each team wound up at 27-under 261.

However, Blixt and Smith had the best chances in the playoff, missing four putts inside 11 feet before Smith finally connected with the winner.

“I felt like we’re kind of similar,” said Blixt, who claimed his third victory on the PGA Tour. “We joke around at times but we also get extremely serious and into it at times, too.

“I felt like we gave each other a lot of space to play our own game and I felt like our games fit each other very well on the golf course, especially when you have alternate shots. I mean, I felt like I could hit it anywhere and he would get it up-and-down, and I hope he felt the same way.”

Brown and Kisner both missed birdie putts of about 15 feet on the final extra hole before Smith put his away.