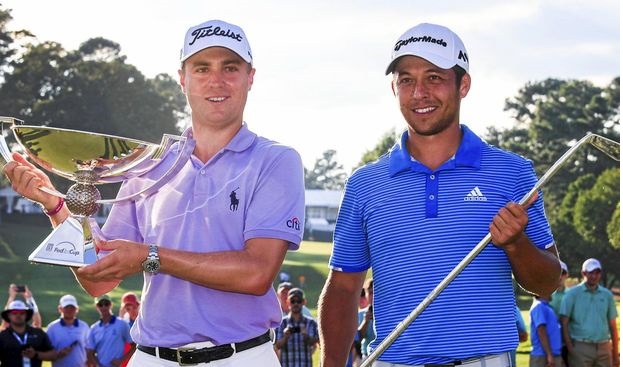 The 23-year-old Schauffele (pictured right) tapped in a two-foot birdie putt on the last hole at East Lake Golf Club in Atlanta to cap a 2-under-par 68 for a one-stroke victory over Thomas, who shot 66 to claim the FedExCup and the $10-million bonus that goes with it.

“I thought I missed it, that’s why I couldn’t even react to celebrate, because I thought I just missed a two-footer to win,” said Schauffele, who undoubtedly wrapped up the PGA Tour’s Rookie of the Year Award. “My hands were shaking so much and I was so nervous. I figured I would just brush it in. … Don’t want to win with a huge whirl-around lip in, but very fortunate it went in.

“We kind of kept it in front of ourselves, especially on 17 (where he saved par for the fourth time in the back nine). That was kind of a big up-and-down and a couple of other holes really. I made a lot of good par putts today.”

Schauffele, who claimed his first PGA Tour victory in July at the Greenbrier Classic, finished with a score of 12-under 268. He became the first rookie to win the Tour Championship.

Thomas, who has won five times this season and is a virtual lock for the PGA Tour’s Player of the Year Award, had three birdies on the last seven holes, but managed only a par at the par-5 finishing hole to shoot 68.

“It was a weird feeling,” said Thomas, who claimed his first major title last month in the PGA Championship at Quail Hollow. “It’s a great achievement, but I’m still bummed I didn’t win (the tournament). It’s been a great year, a hard-working year and to cap it off with this is icing on the cake.

“It is hard at first because as a competitor you are mad that you didn’t win the tournament. And then you have to realize what an unbelievable honor this is, the fact that you can win something over the course of an entire year.”

Paul Casey of England, who took a two-stroke lead to the final round in search of his first PGA Tour victory since his only other one in the 2009 Shell Houston Open, struggled to a 73 and was another stroke back in solo fifth, while U.S. Open champion Brooks Koepka was four shots down in a tie for seventh after a 69.

Jordan Spieth, the FedExCup points leader heading into the finale, shot 67 to wind up five behind in a tie for seventh with Tony Finau, who had a 66, and Jon Rahm of Spain, who came in at 69.

Spieth, the 2015 FedExCup champion, finished second to his pal Thomas in the final standings this time.

Masters champion Sergio Garcia of Spain carded a 67 to wind up six back in a tie for 10th with Matt Kuchar, who also had a 67, and Justin Rose of England, who finished at 69.