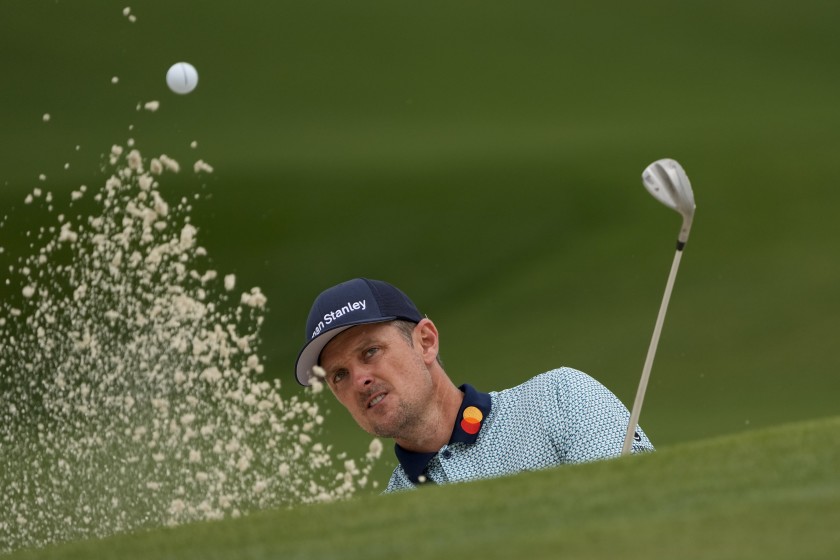 Justin Rose lost his lead briefly, but kept his cool.

Rose got off to a slow start for the second straight day, but rallied on the back nine to salvage an even-par 72 and holds a one-stroke lead over rookie Will Zalatoris and Brian Harman midway through the 85th Masters at Augusta National Golf Club in Augusta, Ga.

“I didn’t quite appreciate the scoring was going to be quite so good today,” said Rose, who won the 2013 U.S. Open and has finished second in the Masters twice. “So again, I felt like the golf course was still fairly tricky the first few holes. The first six holes were always quite difficult around here.

“I think it was just a classic day at Augusta National when you’re just slightly off. You can be a foot or two out on certain occasions, and you end up struggling. I kind of told myself going up the eighth hole, you’re leading the Masters, your frame of reference is a little bit different to yesterday.

“Four ahead (after round one) is something, but you’re still leading so like just enjoy it and keep going. I was able to do that.”

The 40-year-old Englishman made three bogeys against a single birdie on the front nine, but birdied three of the last six holes and posted a 36-hole score of 7-under 137.

Zalatoris, 24, playing in his first Masters after tying for sixth in the U.S. Open at Winged Foot last year, birdied the last three holes for a total of five on the back nine while shooting 68.

“I wanted to be here my entire life,” said Zalatoris, whose only pro victory came in the TPC Colorado Championship on the Korn Ferry Tour. “Some people shy away from that, but I’m excited to be here. … There’s no reason to feel intimidated now. I made it to here.

“It’s a childhood dream to obviously be in the final group of a major on a weekend, especially here. I came here in 2005. I came on Friday. Watched Tiger (Woods) make a 40-footer on the sixth hole, and that was the only shot I saw him hit until I turned professional.”

The left-handed Harman, a Georgia native who has won twice on the PGA Tour and whose best major finish was a tie for second in the 2017 U.S. Open, birdied the last two holes to cap a second 69 and pulled even with Zalatoris.

“I had some nerves this morning for sure,” said Harman, who earned his spot in the Masters by reaching the quarterfinals of the WGC-Dell Match Play Championship three weeks ago. “Whenever you look up on the leaderboard and you see your name up there pretty high at Augusta, it’s hard not to get nervous. But it was nice to settle down with a good birdie on No. 2, and I struck it well all day today.

“Three weeks ago, I didn’t expect to be playing in the Masters. So after a couple good days, to be in contention is just icing on the cake for me. It’s great. I’m going to try to put two more good ones together and see what happens.”

Marc Leishman of Australia, who has five PGA Tour titles and five top-10 finishes in majors without winning, collected three birdies on each nine in a 67 and is two shots back in a tie for fourth with Jordan Spieth, the 2015 Masters champion, who made three birdies down the stretch to shoot 68.

“It’s still a process to getting back to how I used to swing the club, but last week, the win was an exclamation point, for sure,” victory drought by winning the Valero Texas Open last week. “But getting into contention, feeling the pressure, the more you do that, the more comfortable you get and so it was goal accomplished last week.

“Fortunately, Rosie didn’t go off today. Nine under his last 10 holes (on Thursday), that was ridiculous, especially in the conditions. It was some of the best golf I’ve ever seen. Today early in the round I saw he had fallen back, and it was sort of a boost. Being two back going into the weekend, if I can shoot 5-under, that might be good enough.”

Second-ranked Justin Thomas collected six birdies and his only bogey on the last hole in a 67 that left him three down in a tie for sixth with Bernd Wiesberger and Tony Finau, whose 66s were the low scores of the day, Cameron Champ of Sacramento (68), Si Woo Kim of South Korea (69) and Hideki Matsuyama of Japan (71).

Sixth-ranked Xander Schauffele of La Jolla and San Diego State is solo 12th after a 69, fourth-ranked Collin Morikawa of La Canada Flintridge and Cal also had a 69 and is tied for 13th, fifth-ranked Bryson DeChambeau bounced back from a 76 with a 67 and is tied for 17th and third-ranked Jon Rahm of Spain is tied for 21st after a second 72.

Seventh-ranked Patrick Reed, the 2018 Masters champion, struggled to a 75 and in as tie for 32nd that includes eighth-ranked Tyrrell Hatton of England shot 75, while ninth-ranked Webb Simpson stumbled to a 76 and is tied for 40th.

Top-ranked Dustin Johnson, the defending champion, finished at 74-75—149 to miss the cut by two strokes, while 10th-ranked Patrick Cantlay of Los Alamitos and UCLA wound up at 79-73—152 and missed by five.

Rory McIlroy of Northern Ireland, who needs to win the Masters to complete the Career Grand Slam, wound up at 76-74—150 to miss the weekend by three shots.