Matsuyama 4-Up in Masters, Seeks History 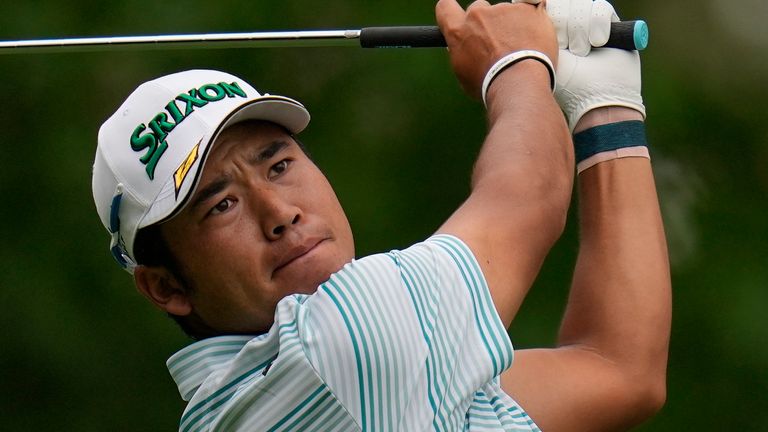 Hideki Matsuyama is one round from becoming the first player from Japan to win a men’s golf major championship.

The 29-year-old Matsuyama played his last eight holes in 6-under-par after a one-hour rain delay to shoot a bogey-free, 7-under 65 and take a four-stroke lead over Justin Rose of England, Marc Leishman of Australia, rookie Will Zalatoris and sixth-ranked Xander Schauffele of La Jolla and San Diego State in the 85th Masters at Augusta National Golf Club in Augusta, Ga.

Through an interpreter, Matsuyama told the media: “Before the horn blew (to halt play), I didn’t hit a very good drive, but after the re-start I hit practically every shot exactly the way I wanted to,” said Matsuyama, the 2011 Low Amateur at the Masters who hopes to win a week after Tsubasa Kajitani of Japan captured the Augusta Women’s Amateur. “I was sitting in my car the whole time during the break, looking at my cell phone.

“This will be a new experience for me, leading going to the final round of a major. All I can do is go relax, get my rest tonight and do my best tomorrow. Unfortunately, I didn’t get to see (Kajitani) win last week because I was playing (in the Valero Texas Open), but I hope to follow in her footsteps and make Japan proud.”

Hisako Higuchi, who captured the 1977 LPGA Championship, and Hinako Shibuno, who won the 2019 Women’s British Open, are the only players from Japan to claim golf major titles.

Rose, who won 2013 U.S. Open and 2016 Olympic Gold Medal, led after each of the first two round this week but could manage only a 72 after making birdies on the first two holes, while Schauffele eagled No. 15 in a 68, Leishman finished at 70 and Zalatoris wound up at 71.

“It was tricky out there because the wind started to blow and it was different for about 30 minutes before the delay,” said Rose, who had been in the lead since opening with a 65. “Then when we came back, the greens were slower because of the rain and it took me three or four holes to figure them out again, and I also got some flyers out of the rough.

“Starting birdie-birdie on this course doesn’t mean much because you’ve got to keep playing. I didn’t play great today, but I’m glad to still have a chance to win. I played with the lead all week and now Hideki has to do it.

“It’s all up for grabs tomorrow.”

Corey Conners of Canada made a hole in one with an 8-iron on the 180-yard sixth hole to highlight a 68 and is five shots back in solo sixth, while 2015 Masters champion Jordan Spieth could manage only a 72 and is one more down in seventh.

Left-hander Brian Harman struggled to a 74 and is seven back in eighth, followed by Tony Finau, who is eight behind in ninth after a 73, while Robert MacIntyre of Scotland totaled 70 and is nine down in a tie for 10th with Si Woo Kim of South Korea and Bernd Wiesberger of Austria, who both came in at 74.

Fourth-ranked Collin Morikawa of La Canada Flintridge and Cal slid to a tie for 29th after a 75, while fifth-ranked Bryson DeChambeau also shot 75 and is tied for 38th, and eighth-ranked Tyrrell Hatton of England is tied for 43rd after a second straight 74.