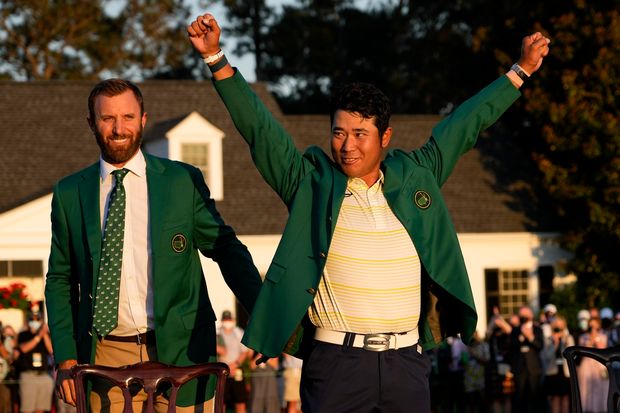 Hideki Matsuyama seemed to be on cruise control, but then had to maneuver past a few bumps in the road.

The 29-year-old Matsuyama became the first men’s golfer from Japan to win a major championship, surviving four bogeys on the back nine to shoot 1-over-par 73 and capture the 85th Masters by one stroke over rookie Will Zalatoris at Augusta National Golf Club in Augusta, Ga.

“I’m really happy,” Matsuyama, who lost most of a six-stroke lead on the back nine, said through an interpreter before receiving the famed Green Jacket from defending champion Dustin Johnson in Butler Cabin. “The nerves started this morning and didn’t stop until I made the last putt. I really didn’t feel comfortable until I hit my tee shot into the fairway on the last hole.

“I was thinking about my family and friends back home in Japan all the way around, and I’m so happy I played well for them. There are a lot of good golfers in Japan and hopefully this will open up the floodgates for many of them to follow in my footsteps.”

Hisako Higuchi, who captured the 1977 LPGA Championship, and Hinako Shibuno, who won the 2019 Women’s British Open, are the only players from Japan to claim golf major titles.

Zalatoris, 24, without full playing privileges on the PGA Tour, birdied the first two holes and two more coming home to post a 70 that was his fourth straight under-par round.

“I can’t really explain what this is like,” said Zalatoris, who was born in San Francisco but later moved with his family to Texas. “I wanted to be on this stage for almost my whole life. The moment was here, so why shy away from it?

“I can play with the best players in the world. My first one is coming and I can’t wait for it to happen. I played really well this week, but I feel like I left a few out there. But this was my first Masters and it was special. I enjoyed every minute of it.

“Still, to come up one shot short is a little frustrating.”

Sixth-ranked Xander Schauffele of La Jolla and San Diego State was within two shots of Matsuyama while playing alongside the leader in the final twosome before hitting his tee shot into the water on the par-3 16th hole and making a triple bogey-6.

Schauffele, who birdied the four previous holes, finished at 72 and was three down in a tie for third with 2015 Masters champion Jordan Spieth, who had four birdies on the back nine in a 70.

“I was feeling really good, playing well, and Hideki gave me some hope,” said Schauffele, who recorded his eighth top-10 finish in the majors without winning. “I was hyped and wanted to be aggressive on 16.

“I thought I flushed it. It was a good shot, but it turned out bad.”

Third-ranked Jon Rahm of Spain eagled the second hole in a bogey-free 66 that was low score of the day and was four behind in a tie for fifth with Marc Leishman of Australia, who closed with a 73, while Justin Rose of England, who led after each of the first two rounds, was one more back in seventh after a 73.

Seventh-ranked Patrick Reed, the 2018 Masters champion, closed with a 69 to wind up six strokes behind in a tie for eighth with Corey Conners of Canada, who totaled 73, while Cameron Smith of Australia shot 70 to finish one more behind in a tie for 10th with Tony Finau, who came in a 72.

Ninth-ranked Webb Simpson tied for 12th after a 70, fourth-ranked Collin Morikawa of La Canada Flintridge and Cal shot 70 and wound up in a tie for 18th that included eighth-ranked Tyrrell Hatton of England, who finished with a 68.

Second-ranked Justin Thomas tied for 21st after a 73, and fifth-ranked Bryson DeChambeau carded a second straight 75 to tie for 46th.