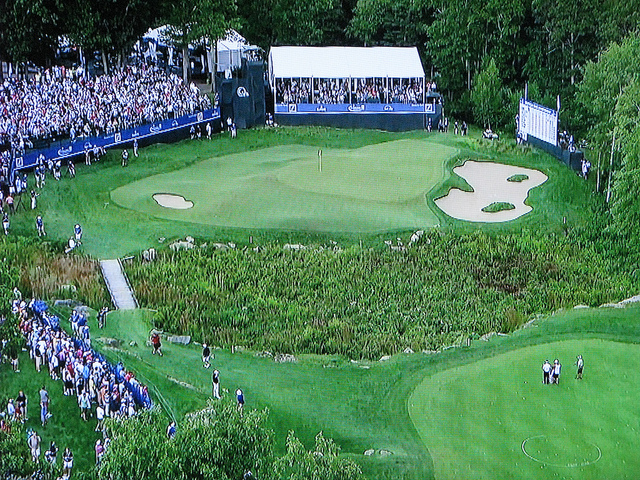 Three times, the second event of the PGA Tour playoffs gave a sneak preview of the FedExCup champion.

McIlroy, who is tied with Dustin Johnson for the most victories in playoff history at four, will be back at TPC Boston this week to defend his title.

“Golf is a funny game,” said McIlroy, who won the Deutsche Bank and the BMW Championship in 2012 to finish second to Brandt Snedeker in the standings that year after coming in 10th in the Tour Championship. “I went into Boston last year 38th in the FedExCup, and that win and just that turnaround in fortunes, it gave me a chance to obviously do what I did at East Lake a few weeks later.

“TPC Boston has been a great place for me in the past, a place I feel very comfortable at and the kind of golf course I’ve played well on, and to get that win last year was awesome. So great memories. I play the golf course very well. I’m excited to get there this year and see a couple of changes that they’ve made on (holes) 12 and 13. Yeah, just great memories from 2012 and obviously last year, and can’t wait to get back.

“I think the thing you have to realize is there’s just so much more golf left to play.”

McIlroy is in a similar position, at 43rd in the standings after a tie for 34th on Sunday in The Northern Trust, which top-ranked Johnson won in a playoff over Jordan Spieth to regain the lead in the point standings.

The other two players who claimed the second event on the playoffs and went on to hoist the FedExCup at East Lake were Henrik Stenson of Sweden in 2013 and Vijay Singh of Fiji in 2008.

Stenson won by two shots over Steve Stricker at TPC Boston and then won at East Lake, while Singh captured the first two playoff events nine years ago and built an insurmountable lead heading into the finale in Atlanta.

After that, the PGA Tour changed the rules, resetting the points heading into the Tour Championship so that any of the top five players in the standings who won at East Lake would walk away with the FedExCup.

It was Singh’s fault for sucking all the drama out of the grand finale to the season.

The Fijian has mostly moved on to the PGA Tour Champions, where he is 12th in the season-long race to the Charles Schwab Cup and would love to unseat Bernhard Langer of Germany, who has claimed the season title the past three years and four times overall.

Stenson, after beating Spieth and Stricker by three strokes in the 2013 Tour Championship, went on to win the Race to Dubai by claiming the World Tour Championship-Dubai on the European Tour. He became the first player to claim both season-long titles in the same year.

“I was right up in the top of things when the playoffs started, and then two wins out of four tournaments, yeah, then I’m sitting here with both trophies,” said the Swede, who also won the Race to Dubai last year.

“This is obviously the highest of everything, to win the FedExCup and win the Tour Championship after the Deutsche Bank two weeks ago. It’s been unbelievable. Yeah, it’s kind of sinking in more and more. To come back, that’s what pays off, the hard work.”

Stenson made another run at the FedExCup title two years ago, when he finished second in both the Barclays and the Deutsche Bank Championship, tied for 10th in the BMW Championship and could have claimed both trophies again, but he tied for second in the Tour Championship.

Spieth took home both trophies that year with a four-stroke victory at East Lake.

If Spieth (second in the point standings), McIlroy, Stenson (22nd), Billy Horschel (31st) or Bill Haas (39th) play well in the next few weeks, one of them might become the second player to claim the FedExCup twice since the inception of the season-long race 10 years ago.

It probably would take winning the Tour Championship to pull it off.