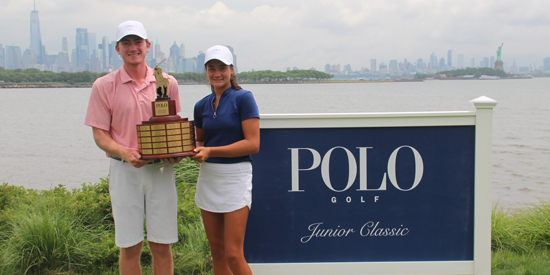 Kiara Romero of San Jose is on a roll.

“These last few years I never won an AJGA tournament,” said Romero, the 2020 Girls Junior Tour of Northern California Player of the Year, who will be a sophomore at California Connections Academy in Ripon.

“I’ve gotten runner-up, so it just feels really good to finally get the win.”

Rated 46th in the Rolex AJGA Girls Rankings, Romero finished 6-0 during this week’s match play, and extended her undefeated streak in match play to 11 matches with her 2-up victory over 44th ranked Katie Li of Basking Ridge, N.J., to claim the title.

Nicholas Dunlap of Huntsville, Ala., who has committed to Alabama, was 3-down to Benjamin James of Milford, Conn., a Virginia commit, after 10 holes and never led before winning the last two holes of regulation and winning with a par on the second playoff hole.

“I don’t think it has settled in yet,” said Dunlap, who also was 6-0 for the week. “From being 2-down with two to play to ending up winning just shows me to never give up. For this to be my first AJGA and invitational win out here, it’s just awesome, it makes it so much better.”