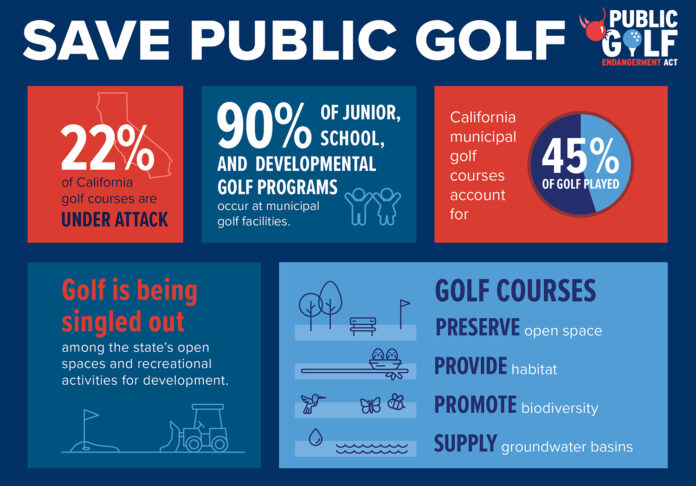 Public golf courses in California dodged a bullet when a new California Assembly Bill never actually came to a vote in early April.

Assembly Bill 1910, the latest version of a bill originally introduced in 2021 as AB 672, was pulled from the Local Government Committee by author Cristina Garcia, (D-Bell Gardens). The proposed law would turn public golf courses into affordable housing.

“While the reasons for the withdrawal are known only to (Garcia), we have reason to believe that she pulled it because it didn’t have the votes to get out of committee today,” the SCGA said in a statement after the bill was pulled from committee. “While it is possible to bring the bill back to the Local Government Committee when it next meets April 20, it’s hard for us to see what can be done between now and then to secure the necessary votes for passage.”

The proposed bill was pulled from a committee, signally the end of the latest struggle for what could allow municipal golf courses in the state to be converted into affordable housing. The bill has yet to receive a full vote from the Assembly.

The bill could have allowed golf courses owned by municipalities to be redeveloped into affordable housing and provided $50 million in state grants for developers.

Craig Kessler, director of public affairs for the SCGA, says approximately 22 percent of the 1,100 golf courses in the state are municipally owned.

“Put yourself in the position of a politician. Every vote they cast upsets somebody,” Kessler said.

“But they cast those votes to upset someone if there is some real positive good that they believe in. So even though an officer holder is committed to building more houses, they look at this and say, ‘So I’m going to upset a lot of golfers in exchange for so little housing?’ I’m not sure that’s a good idea.”

Golf organizations have said they believe the bill targets golf rather than also focusing on other recreational areas like parks, soccer complexes or baseball complexes. In addition, the bill ignores the Parks Preservation Act and also the Surplus Land Act. The Surplus Land Act allows cities or other municipalities to sell land but those who will keep the land as recreational are first in line for the property.

Kessler said that while the bill made it through the housing committee of the assembly, he believes that the bill was pulled from the local government committee because Garcia didn’t have the five votes needed to advance the bill.

In addition, Kessler said the SCGA has contacted legislators and talked about how communities want to keep their municipal golf courses, putting additional pressure on assembly members

“So we will be watching those things,” Kessler said. “But I think it is highly unlikely.”

The bill failed to get out of committee in 2021, then made it through two committees before stalling in the appropriations committee in January. The bill was then re-introduced with the new AB 1910 number in February.

AB 1910 could be submitted to the local government committee again in a few weeks, but Kessler said Garcia needs to be assured that she has the voters she didn’t have before the latest proposed vote.

Kessler added that there is a process known as “gut-and-amend,” in which a bill is stripped of all content and refiled with unrelated content at the close of session.