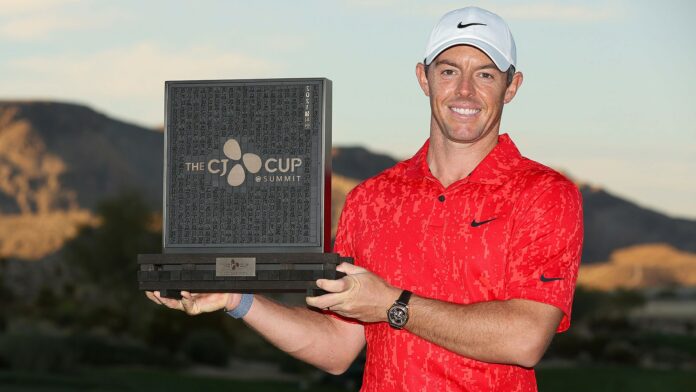 Following a week in Japan for the Zozo Championship won by Keegan Bradley, the PGA Tour returns to the United States this week for the CJ Cup in South Carolina at Congaree Golf Club in Ridgeland, S.C.

Third-ranked Rory McIlroy of Northern Ireland is back to defend the title he claimed last won year by one stroke over ninth-ranked Collin Morikawa of La Canada Flintridge and Cal when the tournament was played at The Summit Club in Las Vegas.

McIlroy, who has won 34 times as a pro, will be playing Congaree for the first time.

“This will be my first time beginning a PGA Tour season with a title defense, so I will enjoy drawing back on positive memories from 2021,” said McIlroy, who hasn’t played on the PGA Tour since winning the Tour Championship in August to claim the FedEx Cup for the third time.

“I am really looking forward to seeing what Congaree is all about. From the design of the golf course to the overall player experience, everything I have heard about it from those who played there was overwhelmingly positive.”

Last year, McIlroy sank a 35-foot eagle putt from the fringe on the par-5 14th hole en route to a 6-under-par 66 to claim a one-stroke victory over Collin Morikawa of La Canada Flintridge and Cal, who sank a seven-foot eagle putt on the last hole to cap a bogey-free 62.

That left him agonizingly one shot short.

“Whenever you shoot 62 you’re always going to be pleased,” said Morikawa, who won the 2021 Open Championship at Royal St. George’s Golf Club in Sandwich, England. “But I thought I left a few out there, especially with some putts. But overall I’m very pleased the way this last 18 went, especially at a course that I’ve played a lot. I felt very comfortable and it’s a good way to start the season.”

Joining the second-ranked McIlroy and the ninth-ranked Morikawa in the field are top-ranked Scottie Scheffler, the reigning Masters champion; fifth-ranked Jon Rahm of Spain, coming off a victory at home in the Acciona Open de Espana; eighth-ranked Justin Thomas, the reigning PGA champion, and 10th-ranked Matt Fitzpatrick of England, the reigning U.S. Open champion.

The CJ Cup was first played in 2017 at Nine Bridges Golf Club in Jeju Island, South Korea, where it was contested for three years before moving to Shadow Creek Golf Club in Las Vegas in 2020 and The Summit Club last season.

1. Rory McIlroy, Northern Ireland – The second-ranked McIlroy won the CJ Cup last season in Las Vegas for one of his 22 PGA Tour victories, including three last season capped by the Tour Championship to claim the FedEx Cup. Rory, who tied for 21st in the 2020 CJ Cup at Shadow Creek, leads the DP World Tour’s Race to Dubai as he makes his season debut on the U.S. Tour.

2. Jon Rahm, Spain – After rising to fifth in the world by winning the Acciona Open de Espana on Sunday at home in Spain, Rahm opens the new PGA Tour season in the CJ Cup, in which he tied for 21st in his only appearance two years ago. He captured the Mexico Open at Vidanta last season for one of his seven career victories on the PGA Tour, including the 2021 U.S. Open.

3. Justin Thomas, United States – JT, ranked eighth in the world, captured the CJ Cup in 2017 and 2019 at Nine Bridges Golf Club in Jeju Island, South Korea, for two of his 15 victories on the PGA Tour. He also tied for 12th two years ago in the tournament and tied for 18th last year. Thomas won the PGA Championship for the second time among 10 top-10 finishes last season.

4. Collin Morikawa, United States – The ninth-ranked Morikawa chased Rory McIlroy all the way to the finish in the CJ Cup in last year before finishing one stroke behind by closing with an eagle for a 62. A five-time winner on the PGA Tour, including the 2021 Open Championship at Royal St. George’s, he also won the 2021 DP World Tour Championship and the Race to Dubai.

5. Matt Fitzpatrick, England – The reigning U.S. Open champion, ranked 10th in the world, is making his season debut on the PGA Tour after finishing 15th in the FedEx Cup standings with 10 finishes in the top-10 last season. Fitzpatrick, who has won eight times as a pro, including the 2016 DP World Tour Championship in 2016 and 2018, is making his debut in the CJ Cup.

6. Scottie Scheffler, United States –The top-ranked Scheffler, who claimed his first four PGA Tour titles last season among 11 finishes in the top 10, is making his season debut this week by playing in the CJ Cup for the third time. He is hoping for better in South Carolina after he tied for 38th last season at The Summit Club and tied for 52nd the year before at Shadow Creek.

7. Viktor Hovland, Norway – Despite a tie for fifth in the Zozo Championship last week in his PGA Tour season debut, Hovland remained No. 11 in the world. He claimed his third victory on the circuit and sixth as a pro last season in the at Mayakoba, one of his 10  results in the top-25 for the season. Tied for 12th in the CJ Cup last season after a tie for 18th the year before.

8. Hideki Matsuyama, Japan – Ranked 19th in the world, Matsuyama managed only a tie for 40th last week in his title defense in the Zozo Championship at home in Japan after opening the season with a tie for 25th in the Fortinet at Napa. The 2021 Masters champion tied for third in the 2019 CJ Cup at Nine Bridges, tied for 18th the year before and tied for 21st in 2020.

9. Tom Kim, South Korea – After winning two of his previous four starts, including the Wyndham Championship late last season and the Shriners Children’s Open to start the new season, the 20-year-old Kim tied for 25th last week at the Zozo Championship in Japan. Already an eight-time winner as a professional, he is making his debut in the CJ Cup this week.

10. Max Homa, United States – By winning the Fortinet Championship in his title defense at Napa and tying for 20th in the Shriners Children’s Open to start the season, Homa has risen to No. 18 in the world. He has won five times on the PGA Tour and seven times as a pro, but is looking to improve in the CJ Cup after a tie for 65th in 2019 and a tie for 72nd last season.

2. Mito Pereira, Chile – Seven-time winner on lower pro tours finished T-4 in the Shriners and played for the International Team in the Presidents Cup. Pereira makes his debut in the CJ Cup.

3. Lee Hodges, United States – Winner of the 2021 Portland Open on the Korn Ferry Tour was in the chase before finishing T-23 in the Zozo and T-30 at Sanderson Farms to start this season.

4. Christiaan Bezuidenhout, South Africa – Seven-time winner as a professional finished T-20 in the Shriners and T-29 in the Zozo to start this season. Making his debut in the CJ Cup.

5. Taylor Moore, United States – Has won three times on lower tours and last week was in the hunt before a 70 left him T-12 in the Zozo. Also was T-24 in the Sanderson Farms this season.