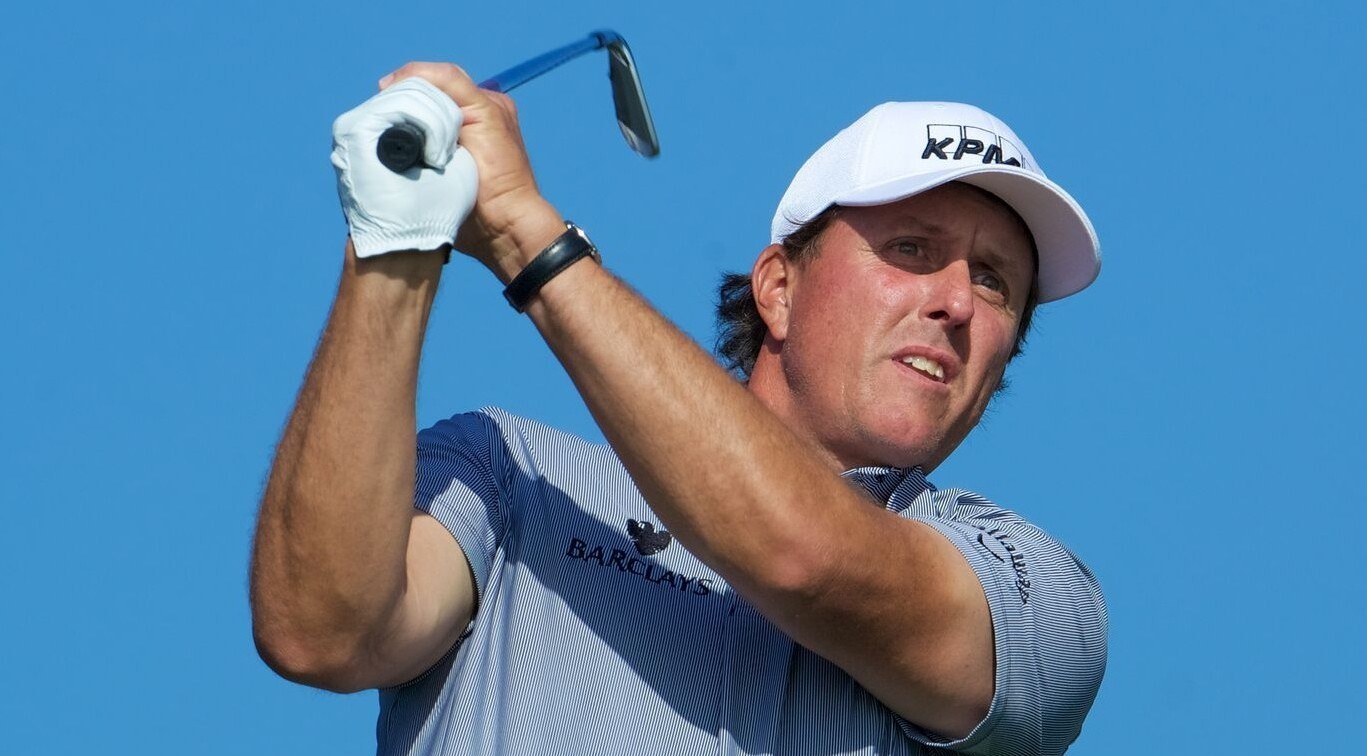 There are storylines galore heading into the 121st U.S. Open this week on the South Course at Torrey Pines in La Jolla, especially since 50-year-old Phil Mickelson stunned the golf world by becoming the oldest major champion in history when he claimed his sixth major title with his victory in the PGA Championship last month at Kiawah Island, S.C.

Beginning Thursday, Lefty will attempt to become the sixth player to complete the Career Grand Slam by winning the U.S. Open, in which he has finished second six times. If he can win, he will join Gene Sarazen, Ben Hogan, Gary Player, Jack Nicklaus, and Tiger Woods as the only players to win all for majors.

“I’ve believed for some time now without success that I could play at my best and compete in major championships still, but until this week, I haven’t proven it to myself or anyone else. I do believe that if I stay sharp mentally, I can play well at Torrey Pines. I’ll take two weeks off before that and go out to Torrey and spend time on the greens and really try to be sharp for that week because I know that I’m playing well and this could very well be my last really good opportunity. Although I get five more, but (it could be my last really good opportunity to win a U.S. Open. So I’m going to put everything I have into it.”

Mickelson grew up in San Diego playing Torrey Pines and has won what is now the Farmers Insurance Open at Torrey Pines three times, the last in 2001, although he finished one stroke behind winner Bubba Watson in 2011.

In recent days, he’s spent a lot of time on the course he played as a youngster.

“Other than the (Farmers), I haven’t played here a lot in the last 20 years,” said Lefty, who won the PGA by two strokes over Brooks Koepka and Louis Oosthuizen of South Africa. “But this is the U.S. Open, a tournament I’ve never won, and it’s special because it’s in my backyard.”

If Mickleson can win this week, it probably is the only thing that will surpass the last time the U.S. Open was played at Torrey Pines in 2008, when Tiger Woods defeated Rocco Mediate in a 19-hole playoff.

Woods sank a 12-foot birdie putt on the final hole of regulation before winning the 14th major of his career the next day in the playoff, before finally adding his 15th major title the 2019 Masters.

Woods won’t be at Torrey Pines, where he has won eight times, because he still is recovering from an accident in the SUV he was driving in February in Southern California, sustaining compound fractures in each leg in addition to a shattered ankle.

Koepka, who had knee surgery earlier this year, missed the cut in the Palmetto Championship at Congaree last week, giving him a chance to head to Torrey Pines early.

“I’m playing really good,” said Koepka, who won the 2017 and 2018 U.S. Open and the 2018 and 2019 PGA Championships, and tied four second the recent PGA despite a nagging knee injury. “I like the way I’m striking the ball. I like the way I’m putting the ball, too. Just seemed to be (off) a little bit of speed control.

“(The knee), it’s good. It’s in a really good spot. I like where it’s at. I’ve done enough rehab, strength’s coming around. I mean, I can almost squat down to read a putt like normal. Didn’t do it too much this week just because I don’t want to screw it up for next week.”

Even without Woods, and with Mickleson going for history, this should be another week to remember at Torrey Pines.

1. Jon Rahm, Spain – The third-ranked Rahm probably is atop the list of best players without a major title, and has seven top-10s in the Grand Slam events, including a tie for third in the 2019 U.S. Open at Pebble Beach. Won the 2017 Farmers and had a six-stroke lead in the Memorial two weeks ago before withdrawing after a positive Covid-19 test.

2. Dustin Johnson, United States – DJ was in the chase in the Palmetto Championship last week before fading to a tie for 10th. The top-ranked Johnson claimed a second major title in the Masters by five strokes in November after winning the 2016 U.S. Open by three at Oakmont. Best result in the Farmers at Torrey Pines was a tie for third in 2011.

3. Rory McIlroy, Northern Ireland – Has won four major titles, including the 2011 U.S. Open at Congressional, but none since the 2014 PGA at Valhalla, and has 22 top-10 finishes in the Grand Slam tournaments in his career. The 11th-ranked McIlroy tied for third in the 2020 Farmers at Torrey Pines, tied for fifth in 2019 and tied for 16th this year.

4. Bryson DeChambeau, United States – The defending U.S. Open champion claimed his first major title by six strokes at Winged Foot and tied for fourth in the PGA at Harding Park last year. The fifth-ranked DeChambeau missed the cut in his only two starts in the Farmers at Torrey Pines in 2017 and 2018, failing to break 70 in four rounds.

5. Xander Schauffele, United States – High on the list of best player to never win a major, the sixth-ranked Schauffele has finished in the top 10 on eight occasions in the Grand Slam events, including second in the 2018 Open Championship at Carnoustie and the 2019 Masters. Grew up near Torrey Pines and tied for second in Farmers this year.

6. Justin Thomas, United States – The second-ranked Thomas captured his only major title when he won the 2017 PGA Championship by two strokes over three players, and he has four other top-10s in the majors, including a tie for eighth last year at Winged Foot. He tied for 10th in the 2014 Farmers at Torrey Pines, but missed the cut the next year.

7. Brooks Koepka, United States – Saves his best for the majors and tied for second behind Phil Mickelson in the PGA Championship last month. The 10th-ranked Koepka captured the 2017 and 2018 U.S. Opens, plus the 2018 and 2019 PGAs, and has 10 other top-10 results, including three seconds. Missed the cut in two of three starts in Farmers.

8. Patrick Cantlay, United States – Coming off a victory in the Memorial in his last start, the seventh-ranked Cantlay is another top player seeking his first major victory. He has only two top-10s in the majors, a tie for third in the 2019 PGA at Bethpage Black and a tie for ninth in the 2019 Masters. He missed the cut in two of three starts in the Farmers.

9. Collin Morikawa, United States – Captured his first title by two strokes over Dustin Johnson and Paul Casey last year in the PGA at TPC Harding Park. The fourth-ranked Morikawa tied for eighth in his title defense last month and lost to Patrick Cantlay in a playoff in the Memorial recently. Tied for 21st in the Farmers at Torrey this season.

10. Hideki Matsuyama, Japan – Became the first Japanese player to win a men’s major when he captured the Masters in April after previously posting seven top-10 finishes in the Grand Slam events. The 15th-ranked Matsuyama tied for third in the 2019 Farmers Insurance Open at Torrey Pines, his only top-10 result in the San Diego-area event.

10-B. Phil Mickelson, United States – Claimed his 45th PGA Tour victory and sixth major title last month in the PGA Championship and will make his seventh attempt to complete the Career Grand Slam this week. Mickelson won what is now the Farmers Insurance Open at Torrey Pines in 1993, 2000 and 2001, and finished second in 2011.

1. Joaquin Niemann, Chile – Eight-time winner as a pro, including at the Greenbrier in 2019, was T-23 in first U.S. Open last year at Winged Foot. Has two seconds this year.

2. Sam Burns, United States – Won the Valspar and was second in AT&T Byron Nelson last month. Finished T-29 in 2019 PGA, his only major, and T-18 in Farmers this year.