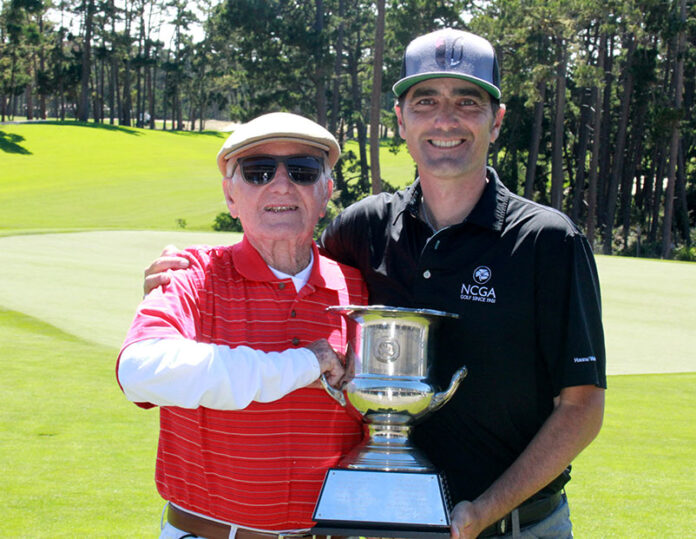 The 39-year-old Moore claimed his 10th NCGA title by beating Matt Hansen of Los Osos with a par on the first playoff hole to win the 39th Mid-Amateur Championship at Poppy Hills Golf Course in Pebble Beach.

Only Randy Haag of Orinda and Casey Boyns of Monterey have more NCGA titles, being tied for the lead with 16.

“I feel like I still have some time to catch them, as long as I don’t break a leg or have some serious injury or something,” said Moore, who also won the 2020 Northern California Amateur. “I can’t believe I’ve got 10 wins now. It feels like it was just five last year. I’m very happy and excited. It means a lot to me having my grandfather (Vincent Randazzo, pictured with Moore) here.

“I was walking down the first fairway and thought, ‘I’ve never lost a playoff, and I’m not going to lose this one.’ The golf wasn’t easy, but I battled to the end. I’m proud of the battle I put up.”

Moore and Hansen both finished at 70-72—142, two-under-par, with Moore getting up-and-down from a greenside bunker for a short birdie putt on the final hole or regulation, which Hansen matched with a 14-foot putt that sent the match to extra holes.

However, Hansen’s approach shot on the playoff hole bounced off the green and he was unable to get up-and-down for par, and Moore won by hitting the green and two-putting for a par.

“I just haven’t played in a tournament in a while,” said Hansen, who recently regained his amateur status. “On No.17, I felt the pressure, especially playing alongside Nick.”

Jason Anthony of Fairfield, who won the last time the tournament was played in 2019, tied for 17th at 75-74—149. The NCGA Mid-Amateur was cancelled last year because of the Coronavirus pandemic.