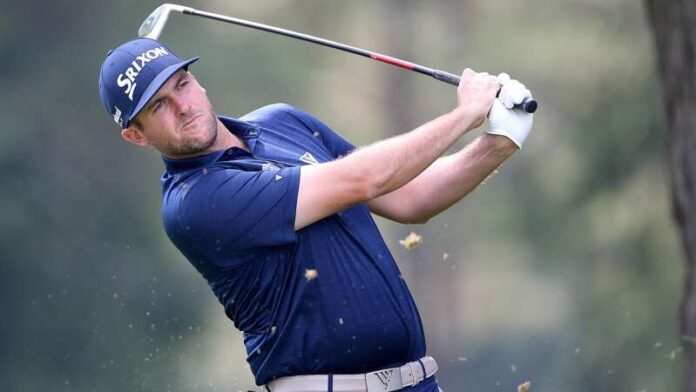 How did Taylor Pendrith of Canada shoot 61? He lipped out a putt for 60 on the last hole.

The 30-year-old Pendrith posted a 10-under-par 61 to take a one-stroke lead over Patrick Rodgers midway through the Butterfield Bermuda Championship in much less windy conditions at Port Royal Golf Course in Southampton, Bermuda.

“It’s definitely been two different days, for sure,” said Pendrith, whose only two pro victories came in 2019 on PGA Tour Canada. “It was so windy yesterday that you were just trying to survive. It was completely different today.

“I drove the ball really well today, put myself in good positions on the greens and made a bunch of putts. I made a birdie on the first hole and it just got me going. I had several 10-plus footers, some 20 feet or more and they just kept going in. It’s really nice to see those longer ones go in.

“And without the wind, it was nice to be able to enjoy some of the views of Bermuda.”

Pendrith, playing in his fourth tournament as a PGA Tour member, started on the back nine and holed out from the rough for an eagle at No. 17 after making three early birdies, and then birdied five more in a row starting on the first hole on his way to a 36-hole score of 11-under 131.

Rodgers, who has finished second three times on the PGA Tour without winning and claimed his only pro victory in the 2015 Pacific Rubiales Colombia Championship on what is now the Korn Ferry Tour, holed out from the fairway for an eagle at No. 7 and added six birdies in his 64.

After playing on the PGA Tour for six years, Rodgers lost his tour card and had to battle his way back last season on the Korn Ferry Tour.

“It was really difficult to go through, to be honest with you,” said Rodgers, who tied Tiger Woods’ career record of 11 victories at Stanford. “My mindset and I think the mindset of most players out here is that I got my card at 22 and I didn’t feel like I would ever be in that position, to be quite honest with you.

“I felt like I had the game to not put myself there and it was maybe a little slice of humble pie, and more so just kind of managing stress on the golf course. I’m definitely feeling like I’m able to breathe a breath of fresh air here as the new season started. I’m really grateful to be out here and I’m playing some stress-free golf, which is nice.”

Vincent Whaley made six birdies in a 67 and is two shots back in solo third, while Danny Lee of New Zealand holed his second shot for an eagle at No. 5 in a 67 and is one more down in a tie for fourth with David Skinns of England, who also finished at 67.

Peter Malnati birdied five of the last seven holes for a 67 and is four down in a tie for sixth with Lucas Herbert of Australia, who holed out for an eagle at No. 17 in another 67, Peter Flavin, who had seven birdies in a 66, and Justin Lower, who birdied three of the first seven holes to kick-start his 68.

Patrick Reed, the highest-ranked player in the field at No. 24 in the world, is tied for 17th after a 69, Matt Fitzpatrick of England, who won the Estrella Damm N.A. Andalucia Masters in Spain two weeks ago in his last start, shot 68 and is tied for 38th, and defending champion Brian Gay made the cut on the number in a tie for 63rd thanks to an eagle at No. 17 in a 67.