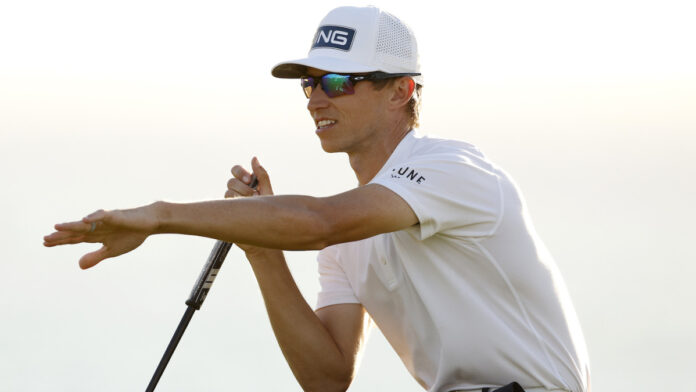 Brandon Hagy made it look like a breeze in the first round of the Butterfield Bermuda Championship.

The 30-year-old Hagy (pictured), from Westlake Village and Cal, carded a 6-under-par 65 and tied for the lead with rookie Chad Ramey in windy and sometimes rainy conditions at Port Royal Golf Course in Southampton, Bermuda.

Play was halted by darkness because of a delay in the morning due to heavy rain, and 13 players were still on the course and will return on Friday morning to finish before the second round begins.

“It definitely played difficult because of that stiff breeze, but I think it probably was a little easier for us in the afternoon,” said Hagy, who has never won as a pro and battled a wrist injury in recent years. “I think the wind laid down a little bit for us, but it was still pretty stout.

“I just hit a lot of good shots, found the fairway most of the time and made a lot of good putts and they went in. You’re going to set some gusts and I got one and missed a 2½-foot putt for par on the seventh hole.

“But I’m definitely happy with my round today.”

Hagy, who lost in a playoff at the 2018 Wichita Open on what is now the Korn Ferry Tour, started at No. 10 and made 10 birdies in his round, including four in a row through the 14th hole and added another birdie at No. 17 after making a double-bogey 6 on the 15th.

Ramey, 29, who won the 2020 Live and Work in Maine Open on the Korn Ferry Tour for his only pro victory, birdied three of his last four holes while finishing his 65 on the front nine.

“I feel pretty comfortable,” said Ramey, who tied for 14th in the Shriners Children’s Open in his last start after opening with 63. “There’s 25 to 50 other guys that I played with (on the Korn Ferry Tour) that are out here every week.

“It’s just new courses really. You know, the golf’s the same, it’s just (that) I kind of have to play a little more just to learn the new courses.”

Vincent Whaley holed out from the rough for an eagle on the 17th hole to highlight a 66 that left him in solo third, while David Skinns of England sank his third shot from the fairway at No. 7 for another eagle en route to a 67 and is tied for fourth with Danny Lee of New Zealand, Garrick Higgo of South Africa, Seamus Power of Ireland, Kiradech Aphibarnrat of Thailand and Justin Lower.

Patrick Reed, the highest-ranked player in the field at No. 24 in the world, shot 68 and is in a tie for 10th with Patrick Rodgers of Stanford, Dylan Frittelli of South Africa, Austin Eckroat and Greyson Sigg.

Reed hit the shot of the day after driving into the penalty area at No. 17, taking a drop in the primary rough and holing his third shot from 208 yards for an improbable eagle.

“I had almost 210 to the flag after I took my drop, and it was downwind so I went with my 6-iron,” said Reed, who claimed his ninth PGA Tour victory early this year in the Farmers Insurance Open at Torrey Pines in La Jolla.

“I just flushed it and it went in the hole.”

Matt Fitzpatrick of England, who won the Estrella Damm N.A. Andalucia Masters in Spain two weeks ago and is tied for 34th at 71 and said: “That’s the hardest wind I’ve ever played in.”

Defending champion Brian Gay is tied for 89th at 75.