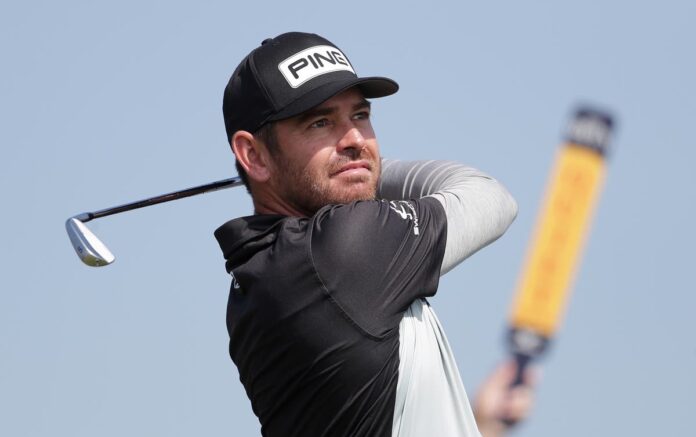 Louis Ooosthuizen of South Africa showed again that he is a major player.

The 38-year-old Oosthuizen, who has six runner-up finishes in the Grand Slam events, posted a bogey-free, 6-under-par 64 to take a one-stroke lead over Jordan Spieth and Brian Harman after the opening round of the 149th Open Championship at Royal St. George’s Golf Club in Sandwich, Kent, England.

“Probably in my mind it was the perfect round I could have played,” said Ooosthuizen, who won the 2010 Open Championship at St. Andrews. “I didn’t make many mistakes. When I had good opportunities for birdie, I made the putts. So, yeah, just a very good, solid round.

“I think I probably would have taken seven pars (at the start) again. I’ve learned over the years playing major championships that patience is the key thing, and even if you make bogeys, know that a lot of people are going to make bogeys.

“All of a sudden just made two good (birdie) putts on 8 and 9 and got the ball rolling. t happened quickly.”

Oosthuizen, who has nine finishes in the top 10 and 23 in the top 25 in the majors, parred the first seven holes before making three straight birdies through No. 10 and three more in four holes through No. 16.

Spieth took his only bogey on the second hole before making four straight birdies through the eighth hole and added two more coming home in his 65, which the left-handed Harman matched with four birdies on the first five holes and two more on the back to go with two bogeys.

“There’s a lot of external factors over here, and I think that external is where I need to be living,” said Speith, who struggled after claiming his third major title in the 2017 Open Championship at Royal Birkdale in England before winning the Valero Texas Open in April. “You get less swing-focused and more shot-focused over here because the second you take your brain off of what you’re hitting, you may not find your ball. t

“To be honest, the path that I’m on and where I’ve been before in the game, I feel really good about my chances going forward, (being) as good as they have been historically. I feel like I’ve been trending the right way and certainly had a chance this year already at Augusta. I like where I’m at.

“By no means do I feel like I’m where I want to be mechanically yet, but this year has been a really, really good progression for me, and all I’m trying to do is just get a little bit better each day.”

Said Harman, who has longtime manager Jeremy Elliott on the bag because his regular caddie, Scott Tway, couldn’t get to England because of passport issues: “COVID has been tough 65. (Tway) was trying to get his passport renewed in time and he just couldn’t get it done. He’s bummed. This is his favorite tournament. He really wanted to be here.

“I’m really comfortable with (Elliott) and he gives me good numbers. It was fun.”

Stewart Cink, who won the 2009 Open at Turnberry Resort in Scotland, shot 66 and is tied for fourth with Mackenzie Hughes of Canada, Dylan Frittelli of South Africa, Webb Simpson and Benjamin Herbert of France.

Fourth-ranked Collin Morikawa of La Canada Flintridge and Cal finished at 67 and is tied for ninth with Justin Rose of England, Justin Harding of South Africa, Scottie Scheffler, Danny Willett of England, Tommy Fleetwood of England, Marcel Siem of Germany, Andy Sullivan of England, Byeong Hun An of South Korea and Jack Senior of England.

Top-ranked Dustin Johnson is tied for 19th at 68, while fifth-ranked Xander Schauffele of La Jolla and San Diego State shot 69 and is in a tie for 32nd that includes eighth-ranked Brooks Koepka, and 2014 Open champion Rory McIlroy of Northern Ireland is tied for 48th at 70.

Second-ranked Jon Rahm of Spain, the U.S. Open champion, totaled 71 and is in a tie for 74th that includes sixth-ranked Bryson DeChambeau of Clovis and defending champion Shane Lowry of Ireland.

PGA champion Phil Mickelson, who won the 2013 Open at Muirfield in Scotland, struggled to an 80 and is tied for 155th, and last in the field.