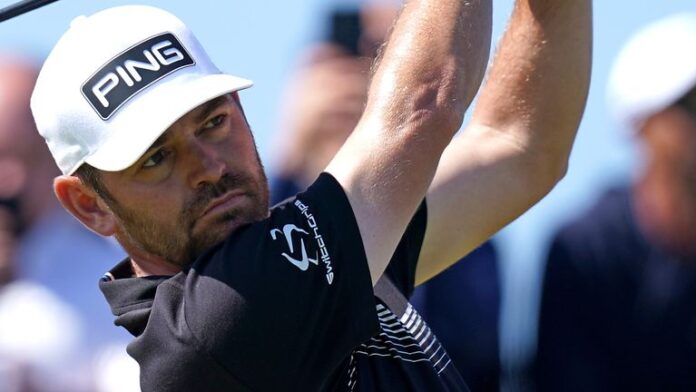 Louis Ooosthuizen of South Africa simply remained in cruise control, and set a record in the process.

“The wind died down in the afternoon, so we had perfect conditions for links-style golf,” said Oosthuizen, who has finished second in the last two majors and six times overall in the Grand Slam events. “The greens were a little slower, so you had to make sure to hit your putts hard enough.

“I had a good start, making a birdie putt on the first hole, but then just kind of plodded along for the rest of the front nine before heating up on the back, making an eagle putt at 14. I made a couple of mistakes coming up, but overall, it was a good day.

“My game is in a good place and I figured out the course strategy, so I just have to keep doing the same things on the weekend.”

Oosthuizen, whose only major victory came in the 2010 Open Championship at St. Andrews, recorded two birdies on each nine in addition to his eagle and made his first bogey of the tournament at No. 17 en route to a tournament record 11-under 129 for 36 holes.

Morikawa, 24, from La Canada Flintridge and Cal, made four birdies on the front nine and added three more early on the back before taking his lone bogey at No. 15 in a 64 that equaled the best score of the day.

“I wouldn’t be here through these two rounds if I hadn’t played last week at the Scottish Open,” said Morikawa, who won the PGA Championship last year in his second major appearance. “I’ve played in firm conditions. I can think of places I’ve played in tighter, drier conditions, but just having fescue fairways and the ball sitting a little different was huge to see last week.

“I changed my irons, my nine- through seven-iron, strictly because I couldn’t find the center of the clubface. I was hitting these iron shots last week that I just normally don’t, and my swing felt good, but it was a huge learning opportunity.

“Last week I wanted to win, but I came out of it learning a lot more, and thankfully it helped for this week.”

Jordan Spieth, who won the 2017 Open Championship at Royal Birkdale in England, birdied three of the first four holes to kick-start a 67 and is three shots back in solo third, while top-ranked Dustin Johnson birdied the last hole to cap a 65 and is one more down in a tie for fourth with Scottie Scheffler, who had a 66, and Dylan Frittelli of South Africa, who made three late birdies in a 67.

Said Spieth, who won the Valero Texas Open in April: “I like the way I’m playing, but I just need to make a few more putts. I thought the course played a little easier today, but it’s going to dry out on the weekend. I’m playing consistent golf and I enjoy this course.”

Emiliano Grillo of Argentina collected nine birdies in a 64 and is five strokes back in a tie for seventh with Daniel Van Tonder of South Africa, who shot 66, and four players who finished at 67—Marcel Siem of Germany, Andy Sullivan of England and Justin Harding of South Africa.

Second-ranked Jon Rahm of Spain, the U.S. Open champion, carded a bogey-free 64 and is in a tie for 12th that includes eighth-ranked Brooks Koepka, who birdied the last three holes for a 66, while defending champion Shane Lowry of Ireland is tied for 17th after a 65.

Third-ranked Justin Thomas finished at 67 and is tied for 41st, while fifth-ranked Xander Schauffele of La Jolla and San Diego State totaled 71 and is in a tie for 53rd that includes 2014 Open champion Rory McIlroy of Northern Ireland, who wound up at 70.