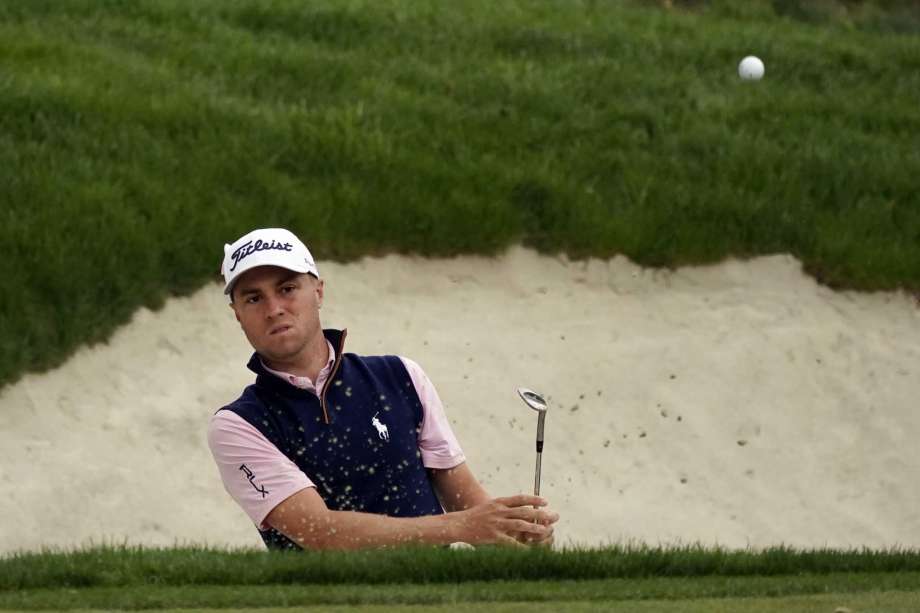 Justin Thomas held the lead going to the third round of the Zozo Championship at Sherwood, gave it up for much of the way, but was on top of the leaderboard again at the end of the day.

The third-ranked Thomas made two late birdies while shooting 5-under-par 67 and has a one-stroke lead over second-ranked Jon Rahm of Spain heading to the final round at Sherwood Country Club in Thousand Oaks.

“It’s huge because I didn’t feel like I was at my best and still shot 67,” said Thomas, who birdied the first two holes, but made only two more until regaining the lead with birdies on the 16th and 17th holes. “I just went back to what I did the first couple days and made some birdies near the end.

“It doesn’t matter how big the lead is, I’m always a little nervous. I think the most nervous I was when I had a seven-stroke lead in the Sony. I can’t go out there and try to protect the lead, I have to try to make some birdies and try to expand it.

“I’ll just draw on my past experiences. Other guys are going to go low, but I have to just take care of myself.”

Rahm, who sank a 17-foot eagle putt on the second hole and added seven birdies while shooting 63, took the early clubhouse lead but was pretty sure he wouldn’t be ahead at the end of the round.

“I think at least one or two guys will be ahead of me at the end of the round,” said Rahm, who also has won twice on the PGA Tour in 2020. “I was five back at the beginning of the day and just went out and made a bunch of birdies, made plenty of putts.

“The course is get-able and I made some putts early. I’ll have the same game plan tomorrow. Somebody is going to shoot low, so you just have to go out there and go as low as you can.”

Lanto Griffin, whose only PGA Tour victory came in the 2019 Houston Open, held sole possession of the lead after making birdies on the first four holes and stayed on top until his only bogeys at Nos. 16 and 18 left him two shots back in third after a 68.

Patrick Cantlay of Los Alamitos and UCLA, who is bogey-free through 54 holes, also carded a 68 and is one more down in a tie for fourth with first-round leader Sebastian Munoz of Colombia and Ryan Palmer, who both finished at 66.

Munoz sank an improbable 43-foot birdie putt on the last hole, whole Palmer made a seven-footer for eagle at No. 14.

Eighth-ranked Webb Simpson birdied the last four holes for a 67 and is four strokes behind in a tie for seventh with two-time Masters champion Bubba Watson (68), Matthew Fitzpatrick of England (67), Brian Harman (67), Scottie Scheffler (69) and Dylan Frittelli of South Africa (70).

Tenth-ranked Patrick Reed is tied for 20th after a 71, while fourth-ranked Rory McIroy of Northern Ireland had a second straight 67 and is tied for 36th.

Fourth-ranked Collin Morikawa, the PGA champion from La Canada Flintridge and Cal, totaled 72 and is in a tie for 39th that includes seventh-ranked Xander Schauffele of La Jolla and San Diego State, who shot 67, while ninth-ranked Tyrrell Hatton of England struggled to a 76 and is tied for 48th.

Defending champion Woods, who won the World Challenge that benefits his Tiger Woods Foundation five times at Sherwood, shot 71 and is tied for 68th.