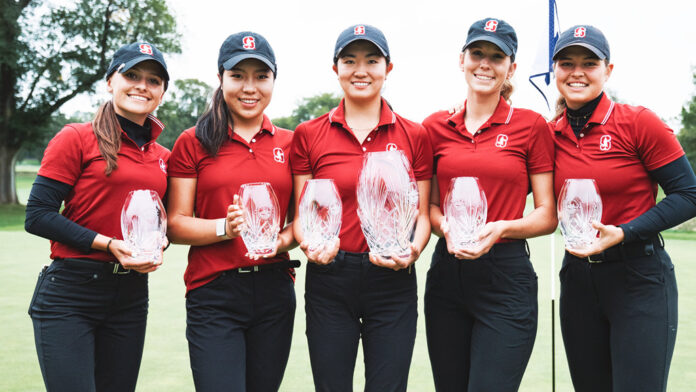 The 18-year-old Zhang (pictured center), the No. 1-ranked women’s amateur in the world from Irvine, got off to a shaky start in the final round before rallying to beat Jackie Lucena of Florida by one stroke as Stanford claimed an eight-stroke triumph over Virginia in the Windy City Collegiate at Westmoreland Country Club in Wilmette, Ill., outside Chicago.

“You’re going to have bogeys and you’re going to not have the best holes, but it’s good to have the mindset that you can keep coming back and one less stroke means one less stroke for your team,” said Zhang, who also won her first college start recently and led the Cardinal to victory in the Molly Intercollegiate at Bayonet Golf Course in Seaside.

“It’s very different because you’re not playing for yourself only, you’re playing for your team, and I love the team environment. Every single event, we talk about never giving up for your teammates. Being able to be a part of something bigger than yourself definitely makes a difference, and I’ve been loving it so far.”

Zhang, the 2021 U.S. Girls champion and the 2020 U.S. Women’s Amateur winner, made a bogey on the second hole and a double bogey on the third, but then was flawless the rest of the way, carding three birdies in four holes through No. 9 and making a birdie on the 16th hole that proved to be the difference. She finished with a score of 72-70-70—212, 4-under-par.