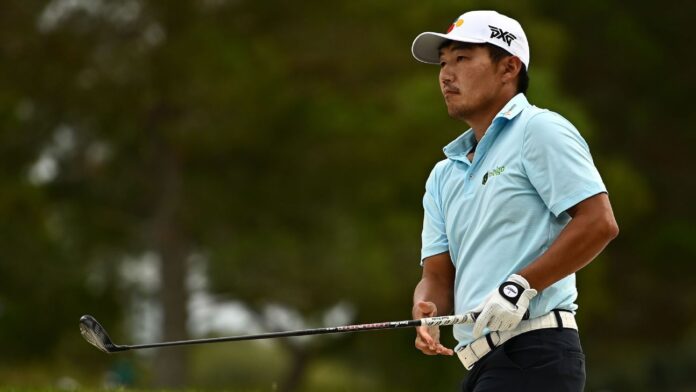 Sung Kang of South Korea has been struggling since claiming his only PGA Tour victory in the 2019 AT&T Byron Nelson, so recently he decided to look at video to see what was wrong with his swing, and it seems to have paid off.

The 34-year-old Kang posted a brilliant, 10-under-par 61 to take a two-stroke lead over Charley Hoffman, rookie Chad Raney and Sungjae Im of South Korea after the first round of the Shriners Children’s Open at TPC Summerlin in Las Vegas.

“I don’t normally look at my swing with a video too much, I don’t like to do it, but we started looking at it probably a couple weeks ago,” said Kang, who claimed four other pro victories in Asia. “So we had some issues, like probably of five, six issues, and we’re trying to take one out of play like every week. So we fixed a couple things last week and then it’s still sometimes not there, so we try to fix something else. And it helped out.

“So, the last few weeks I wasn’t driving it very good, but my iron play was pretty sharp, and my putting was pretty good. So I was just thinking if I can get my driver somewhere in play I could actually score better. And we figured something out on Tuesday and started driving it a lot better and I drove it quite better than last few weeks.

“Everything just worked out great.”

Kang, who has only one top-15 finish in his last 41 starts on the PGA Tour, started at No. 10 and collected five birdies on the back nine before adding four more against one bogey on the front and sank an 18-foot eagle putt to cap his round at No. 9.

His 61 was one stroke off the tournament record and one shy of his personal best, shot in the second round of the AT&T Pebble Beach Pro-Am.

Hoffman of Poway, who played at UNLV, collected nine birdies in a 63 and shares second with Im, who had five straight birdies on the back nine in his bogey-free round, and Ramey, who birdied seven of the last nine holes.

“You get no wind, you can start attacking this golf course,” said Hoffman, who recently moved from Las Vegas to San Diego but know TPC Summerlin well. “It starts blowing 15-to-20 (mph), it’s a different animal.

“You’ve got to hit the fairways. I was able to hit a few fairways and I was able to attack on those holes and I’ve been out here. … I went to college out here in 1995, so this is not my first time around this golf course and the greens were somewhat receptive and rolling smooth this morning, so I was able to make some birdies.”

Matthew Wolff of Agoura Hills had five birdies on the back nine in a bogey-free 64 and is tied for fifth with Adam Schenk, who also played bogey-free, Taylor Gooch, who holed a 68-foot bunker shot for an eagle at No. 9, Chesson Hadley, who sank a 212-yard shot for eagle on the seventh hole, and Matt Jones of Australia, who collected seven birdies in his bogey-free round.

Masters champion Hideki Matsuyama of Japan birdied the last two holes for a 65 and is tied for 10th with eighth-ranked Louis Oosthuizen of South Africa, who had three birdies on each nine in a bogey-free round, Nick Taylor of Canada, who also played bogey-free, Brandon Hagy of Westlake Village and Cal, Anirban Lahiri of India, who chipped in from 45 yards for an eagle at No. 16, Taylor Pendrith of Canada, who had three late birdies, and Rory Sabbatini of Slovakia, who birdied four of the first seven holes.

Sam Burns, who won the Sanderson Farms Championship last week, is tied for 17th after a 66, while 2020-21 Rookie of the Year Will Zalatoris shot 68 and is in a tie for 60th that includes ninth-ranked Brooks Koepka, while defending champion Russell Knox is tied for 126th at 72.