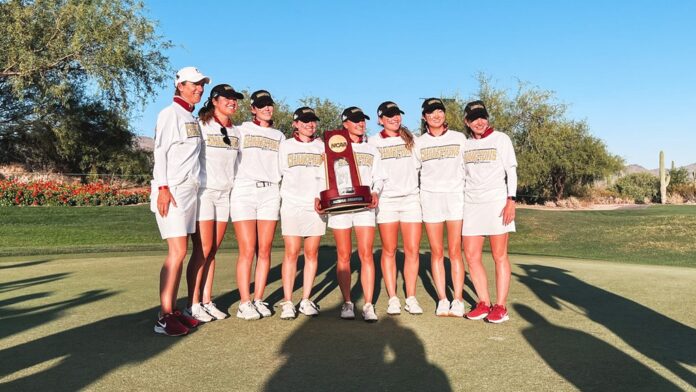 Freshman Rose Zhang of top-ranked Stanford, the NCAA individual champion, sank a five-foot par putt on the 17th hole to claim a claim a 3-and-1 victory over Sofie Kibsgaard Nielson of Oregon and give the Cardinal its second national title by a score of 3-2 in an all-Pacific 10 Conference final at Grayhawk Golf Course in Scottsdale, Ariz.

Zhang, the top-ranked women’s player in the world from Irvine, took charge against Nielson from by winning the first three holes and never let up en route to the victory that clinched the NCAA title.

On that what turned out to be the final hole, Kibsgaard Nielson was assessed a one-stroke penalty when her pushcart rolled over her ball golf before to her second shot, giving Zhang a little more breathing room.

“We’ve been No. 1 in the nation for most of the season and that’s a lot of pressure,” said Zhang, who won her first three college tournaments in addition to the 2020 U.S. Women’s Amateur Championship and the 2021 U.S. Girls Junior Championship.

“We played well all seek, stuck together and won the NCAA championship in the end. We stayed with our game plan and I’m so proud of our team.”

Brooke Seay started Stanford on its way to victory with a 4-and-3 victory over Ching-Tzu Chen of Oregon, and Aline Krauter downed Hsin-Yu Lu, 5 and 3. Zhang, Seay and Krauter never trailed in their matches.

Briana Chacon claimed the first point for Oregon by winning the last two holes for a 1-up victory over Sadie Englemann, and Tze-Han Lin kept the Ducks’ chances alive with a 3-and-2 victory over 2021 NCAA individual champion Rachel Heck.

“It’d hard to lose, but I can’t say enough about my program and my team,” Oregon Coach Derek Radley said. “I’m so proud of my Ducks and we fought all the way to the end, and we’ll be back her and hopefully win. Go Ducks.”

Said Stanford Coach Anne Walker: “We had so much fun and played so well all week. This team is made up of such amazing people and amazing players, and I’m so proud of them. What an amazing season we had and its incredible to be here at this moment.”