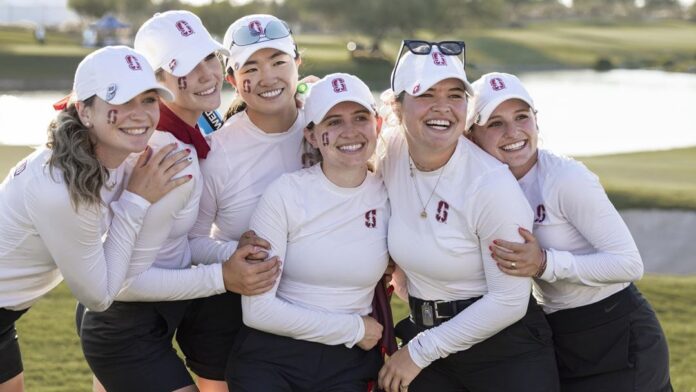 Top-seeded Stanford and second-seeded Oregon will play for the NCAA Championship in an all-Pacific 10-Conference final at Grayhawk Golf Club in Scottsdale, Ariz.

“We’ve been the top-ranked team more times than I’d like to admit and not made it to the title match,” Stanford Coach Anne Walker said. “When the eighth- or the sixth-seed goes against you, they’re just free swinging and that’s really hard. I’m really proud of this group for pulling through.

“It was hard today on that back nine. It was very hot, it’s a demanding golf course, and it was getting late in the day. They dug really deep, and our team dug a little deeper. … (Aline Krauter) it’s really hard to ruffle her feathers in match play. She won the British Amateur and the day she won that she was 3-down through six holes. She’s been in that situation and knows how quickly things can turn, and I think that serves her very well.”

Top-ranked Rose Zhang of Stanford, who claimed the NCAA individual title a day earlier, defeated Mychael O’Berry of Auburn, 5 up, Brooke Seay made a birdie on the 18th hole to down Kaleigh Telfer, 1 up, and Krauter beat Elina Sinz, 2 up, to give the Cardinal its victory in the semifinals.

In the quarterfinals for Stanford, 2021 NCAA individual champion Rachel Heck beat Jenny Bae of Georgia, 2 up, Krauter defeated LoraLie Cowart, 2 and 1, and Seay turned back Jo Hua Hung, 3 and 2.

“We have a really strong team and are just feeding off each other,” Seay said. “Any one of us can have a great day and win. If one of us doesn’t, our teammates have got our back. We just trust each other and nothing is taken for granted.”

Said Oregon Coach Derek Radley after reaching the final in his fourth season with the Ducks:   “It’s not easy to get this far. As a coach, I certainly don’t take these things for granted, but at the same time I felt like we could be here.”

In the finals against Oregon, Seay will face Ching-Tzu Chen in the opening match, Krauter will take on Hsin-Yu Lu, Sadie Englemann will meet Briana Chacon, Heck will match up against Tze-Han Lin, and Zhang will be against Sofie Kibsgaard Nielsen in the anchor match.

Stanford will be attempting to win for the first time since claiming its only NVAA championship in 2015.

Earlier in the day, Krauter was named winner of the Dinah Shore Trophy and Zhang, the top-ranked amateur in the world, was announced as National Player of the Year and Freshman of the Year.