No. 1 Scheffler Shoots 66, Shares Lead With Seven Others in Schwab Challenge 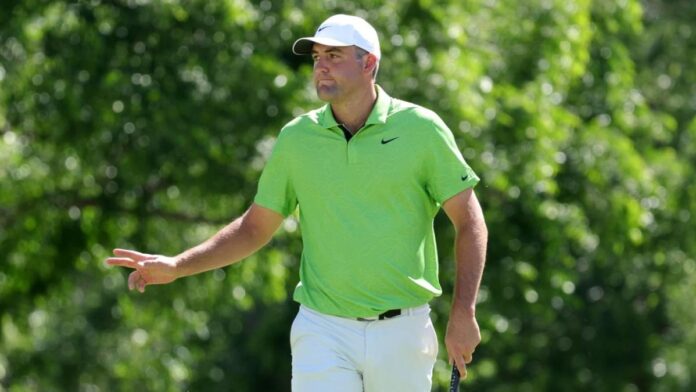 Scottie Scheffler is ranked No. 1 in the World Golf Rankings and he is on top of the leaderboard again, although he has plenty of company.

Scheffler, who has won four times this season, carded a bogey-free 66 and is tied for the lead with Patrick Reed, Webb Simpson, Harold Varner III, Chris Kirk, Nick Taylor of Canada, Beau Hossler of Rancho Santa Margarita and Cam Davis of Australia after the first round of the Charles Schwab Challenge at Colonial Country Club in Fort Worth, Texas.

“I felt like I did a really good job of managing myself around the golf course,” said Scheffler who surprisingly missed the cut in the PGA Championship last week. “Anytime you make no bogeys, it’s going to be a good round. At the PGA, I just kind of got on the wrong side of things and I didn’t play good, I just made too many errors, and that’s what’s going to happen in a major championship.

“I was very frustrated obviously with how last week ended. You never want to miss a cut. I hadn’t missed a cut in a while up to that point, so I think it makes it even more frustrating just knowing that I was playing really good golf and I just didn’t have it that week. That stuff happens.

Scheffler started at No. 10 and made three birdies on the last five holes on the back nine before adding his final birdie at No. 7. The highlight of his round was a 31-foot birdie putt on the 17th hole.

Reed, who has won nine PGA Tour titles including the 2018 Masters but has been in a slump, made his only bogey when finishing his 66 on the ninth hole, while Simpson and Kirk each collected three birdies on each nine, Varner sank a five-foot eagle putt at No. 11, Taylor holed out for eagle at No. 12, Hossler sank shots from 65 yards on the sixth hole and 135 on the ninth for two late eagles, and Davis birdied four of his last six holes.

“The great thing about a season is it’s a season,” said Reed, who has missed the cut five times this season. “You have a lot of time left. If I just keep doing what we’re doing and stick to our game plan, the game is going to come around. Honestly, I feel like the game is where it needs to be, I just need the ball to go in the hole a little quicker.

“It feels good to get a number out of it. Honestly, I feel like there’s been too many days that I’ve done a lot of things really well, just the number hasn’t reflected it. To go around and birdie all four of the par-3s always helps. I was able to attack the par-3s today and I was able to go around there in 4-under, and I think that really helps kind of leading into the week and into the day because there’s some demanding holes out there.”

Said Hossler: “Yeah, it was good, a good day. I guess I obviously hit two good shots, but who would have thought they’d both go in. On No. 6, it looked like it two-hopped and spun and went in. Then, on the last hole, again, I just hit a good gap wedge, and right in the hole, right on the fly. Don’t get those very often, but I’m pretty stoked.”

Kevin Na of Diamond Bar birdied the last two holes to cap a 67 and is tied for ninth with Dylan Frittelli of South Africa, who eagled the first hole and birdied the last, Davis Riley, who played bogey free, Scott Stallings, Pat Perez of San Diego, Camilo Villegas of Colombia and Austin Smotherman.

Seventh-ranked Viktor Hovland of Norway birdied the last two holes to shoot 69 and is in a tie for 26th that includes ninth-ranked Jordan Spieth, who won this tournament in 2016, and defending champion Jason Kokrak.

Fourth-ranked Collin Morikawa of La Canada Flintridge and Cal is tied for 43rd at 70, while fifth-ranked Justin Thomas, who captured the PGA Championship for the second time last week, totaled 71 and is in a tie for 57th that includes 10-ranked Sam Burns.