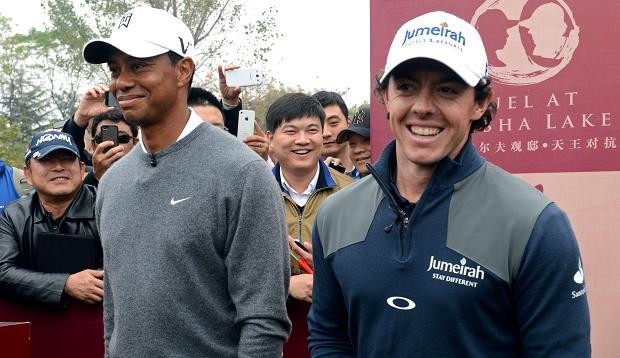 Jack Nicklaus, the greatest golfer of all-time, recently spoke with reporters about Tiger Woods and Rory McIlroy, two players the Golden Bear believes have a chance to one day surpass him.

Woods, who turns 41 tomorrow, has 14 major titles and in 2017 will resume his chase of Nicklaus’ record of 18 after missing roughly 14 months because of two back procedures.

“I’ve always thought that he’s got at least another 10 years of good competitive golf in front of him, if he’s healthy and as talented as he is,” Nicklaus said. “I don’t think anything is safe.

” … I would think he’ll do all right. He’ll play well. I don’t think the injuries are going to be a big issue for him. The biggest issue is going to be between his ears, how does he mentally get back in the game?”

Nicklaus, who won the 1986 Masters at the age of 46, also noticed the Woods spent much of his time off immersing himself more deeply in his golf course design business and believes that also will help Tiger in the next phase of his career.

That’s a page right out of the Golden Bear’s book.

”I always did what I had to do,” said Nicklaus, a prolific course designer. ”If my day was filled up with golf, it would be a boring day for me. I needed more stimulation. I think business and my family and some things I did on the outside created my away time, so that when I came back to play golf, then I really focused on it.

“If golf was all I had, I would have gotten lazy with it. I tried to be very efficient.”

McIlroy, 27, has claimed four major titles, but has run into a bit of a dry spell since winning the 2014 PGA Championship at Valhalla.

The native of Northern Ireland will make his third bid to complete the Career Grand Slam at the Masters in April, and Nicklaus believes Rory has to take his game to another level to be truly great.

“He has won and played on his talent to this point,” Nicklaus said. “If he wishes to dominate and go forward then he’s got to improve. He has to work hard, he’s got to focus on what he is trying to do and it is up to him. Certainly he has all the tools to be able to do it–it is just whether he has the desire and the willingness to give up some other things.

“Whether he wants to be the greatest player to have played the game, that’s his determination and it’s his decision whether he wants to make that effort to try to do that.” As for the Masters, “He certainly has the type of game that would do well at Augusta and he has done well before–he just hasn’t finished it,” Nicklaus said. “He’ll win it. He’s a good player.”

The question is, can McIlroy or Woods surpass Nicklaus as the G.O.A.T. in their sport?