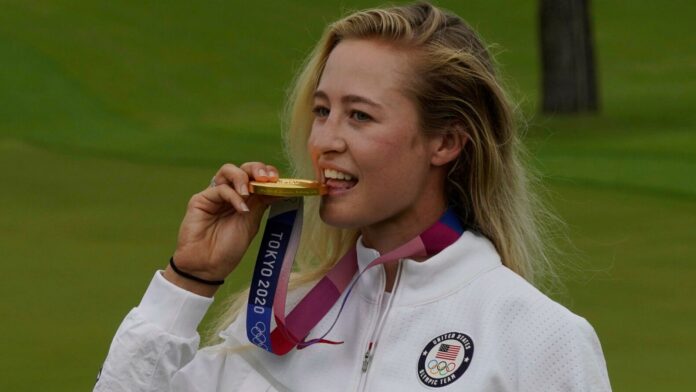 The 23-year-old Korda claimed the Gold Medal in the 2020-21 Women’s Olympic Games Golf Tournament with a clutch par on the final hole to win by one stroke over Mone Inami of Japan and Lydia Ko of New Zealand on the East Course at Kasumigaseki Country Club in Saitama, Japan.

The U.S. swept the Gold Medals in the Olympics, as Xander Schauffele of La Jolla and San Diego State won the Men’s Tournament last week.

“There’s always a lot of stress and I want to fight to the end,” said Korda, who was at least tied for the lead after shooting an 8-under-par 62 in the second round, and closed with a 69. “I’m proud of the fact that I never lost the lead even though other players came at me and were playing well.

“I just want play my best all the time, but that doesn’t always happen, but it’s just crazy to think that I was able to play in the Olympic Games and was good enough to win the Gold Medal. I’m just so happy now.”

Korda, who recently won the Women’s PGA Championship, made five birdies in the final round and overcame a double bogey-5 on the seventh hole to record a winning score of 17-under 267.

Aditi Ashok of India carded a second straight 68 and was two shots back in solo fourth, while Hannah Green made an eagle on the 14th hole to post a 68 that was matched by Emily Kristine Pedersen of Norway and they were four down in a tie for fifth.

Stephanie Meadow of Ireland was one more down in solo seventh after a bogey-free 66, while Shanshan Feng, the Bronze medalist in Rio was six behind in eighth after a 67.

Second-ranked Jin Young Ko of South Korea wound up at 68 and finished seven shots down in a tie for ninth with fourth-ranked Sei Young Kim, also of South Korea (68), ninth-ranked Nasa Hataoka of Japan (69), 10th-ranked Yuka Saso of the Philippines (68), Xiyu Lin of China (68) and Nanna Koerstz Masden of Norway (69).

Sixth-ranked Hoo-Joo Kim of South Korea shot 67 and was in a tie for 15th that included Jessica Korda of the United States, who had a bogey-free 64, while fifth-ranked Danielle Kang of the U.S. made five birdies down the stretch in a 65 and tied for 20th.

Third-ranked ranked Inbee Park of South Korea, who won the 2016 Gold Medal in Rio, tied for 23rd after a 69, while seventh-ranked Brooke Henderson of Canada totaled 67 and wound up in a tie for 29th that included eighth-ranked Minjee Lee of Australia, who had a 68, and Lexi Thompson of the U.S. was 33rd following a 69.