English Leads WGC-FedEx St. Jude by 2 Over Smith, Ancer, Who Both Shoot 62 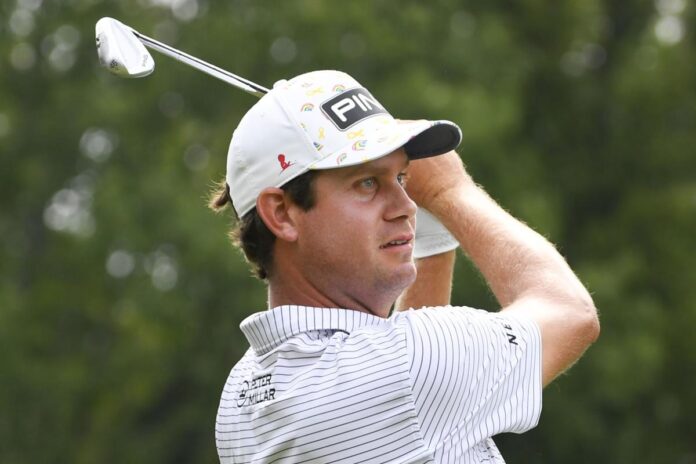 Harris English couldn’t match his opening 62, but Cameron Smith of Australia and Abraham Ancer of Mexico did.

The 32-year-old English (pictured) did card a 5-under-par 65 and holds a two-stroke lead over Smith and Ancer midway through the WGC-FedEx St. Jude Invitational at TPC Southwind in Memphis, Tenn.

“I just hit the ball consistently again, and if you hit the ball in the fairway on this course, it gives you the chance to attack the pins and put for birdies,” said English, who claimed his first PGA Tour victory at TPC Southwind in 2013. “I missed the fairway a couple of times and wasn’t able to reach the green with an iron from the thick rough.

“It’s like that for everyone and there are a lot of birdies and some eagles being made out there. I’m playing well and just have to keep doing what I have been doing, hitting the fairways and greens, and putting for birdies.

“But everyone is doing that and there’s a long way to go, so I just have to keep it up.”

English, who has won the Sentry Tournament of Champions and the Travelers Championship this year and can become the first three-time winner on the PGA Tour in 2021, made his only bogey on the second hole but sank a five-foot eagle putt at No. 3 before adding four birdies en route to a 36-hole score of 13-under 127.

Smith tied a PGA record with only 18 putts in his round, becoming the 12th player to do that, holing out for an eagle from 33 feet from a greenside bunker at No. 3 and adding six birdies in his bogey-free 62, which Ancer matched with four birdies on each nine.

“I was walking down 17 and counting my putts, and thought, ‘That can’t be right,’ but it was,” said Smith, who has won three times on the PGA Tour and twice in Australia. “I could have broken the record but had two putts on the last hole (from 22 feet). It’s pretty cool.

“I just had a really good day on the greens, and made some from off the green, too, and also barely missed some, but I’m not complaining. The greens are so good here, it’s easy to putt. I just hit the ball well and gave myself a lot of chances.

Said Ancer, whose only pro victory came in the 2018 Emirates Australian Open: “That’s always my goal, to be bogey‑free when I tee it up. Makes me kind of simplify every hole, just gets me hitting greens, which is the biggest goal and from there, I just focus obviously on my putting.

“Happy that I got a round like that under my belt here. This is a very demanding golf course off the tee, and also with iron play. I know it wasn’t playing as tough as it could be just because it was a little softer and not very windy, but still you have to hit your spots, for sure.”

Sam Burns made three birdies on each nine in a bogey-free 66 and is three shots down in a tie for fourth with Scottie Scheffler, who started at No. 10 and had five birdies on the back nine in a 67, and Ian Poulter of England, who had a single bogey in his 66.

Seventh-ranked Bryson DeChambeau of Clovis made the last of his six birdies at No. 18 to cap a 66 and is one more down in a tie for seventh with eight-ranked Louis Oosthuizen of South Africa, who made three birdies on each nine in a 64.

Rookie Will Zalatoris birdied three of the last four holes for a second straight 66 and is five strokes behind in a tie for ninth with Jim Herman, who sank a five-foot eagle putt at No. 16 but made bogeys on his last two holes for a 68.

Second-ranked Dustin Johnson, who has six WGC titles, sank eagle putts on the third and 16th holes in a 65 and is in a tie for 13th with fifth-ranked Justin Thomas, the defending champion, who posted a second straight 67.

Third-ranked Collin Morikawa of La Canada Flintridge and Cal made only two birdies in a 71 and is in a tie for 38th with ninth-ranked Patrick Cantlay of Los Alamitos and UCLA, who had two birdies on each nine in a 67, and 10th-ranked Viktor Hovland of Norway, who overcame a double bogey-6 on the fifth hole with seven birdies to finish at 65.

Sixth-ranked Brooks Koepka, who won the 2019 WGC-FedEx St. Jude Invitational, eagled the third hole in a 69 and is tied for 47th, and fourth-ranked Xander Schauffele of La Jolla and San Diego State might be running out of gas after he won the Olympic Gold Medal last week, as he struggled to a 73 that left him in a tie for 60th in the 66-player field.