No. 1 Korda Leads Ashok by 3 Shots Heading to Final Round of Olympics 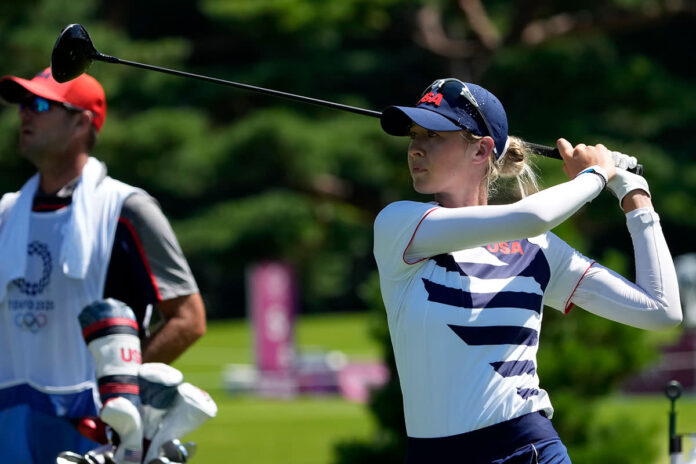 Top-ranked Nelly Korda of the United States didn’t have her best stuff, but still is the player to beat for the Gold Medal.

Korda, who had a five-stroke lead at one time early in the day, posted a 2-under-par 69 and holds a three-shot lead over Aditi Ashok of India after three rounds of the 2020-21 Olympic Games Women’s Golf Tournament on the East Course at Kasumigaseki Country Club in Saitama, Japan.

The final round is in jeopardy because of a tropical storm bearing down on Japan.

“I didn’t play as well as yesterday, but it was still a good day and I beat the golf course,” said Korda, who recently claimed her first major title in the Women’s PGA Championship. “I’m still thinking and planning that we’re going to play 72 holes, and I’m just looking forward to the first shot tomorrow.

“I’m going to have the same attitude as always and go out there trying to win.”

Korda, who took command of the tournament by shooting 62 in the second round, birdied three of the first six holes in round three before making her only bogey at No. 8, and then finished with 10 consecutive pars to record a 54-hole score of 15-under 198.

Ashok, playing alongside Korda, birdied three of the first seven holes and after making her only bogeys at Nos. 9 and 11, added two late birdies to shoot 68.

“I didn’t have my best game today, but I stayed patient, made as many pars as I could and some birdies when I had a chance,” said Ashok, who has won five times as a pro, including three titles on the Ladies European Tour. “It’s always feels good to play in the final group and stay right with the leader. It gives me a lot of confidence.

“Golf is always about playing four rounds, 72 holes, and that’s what I hope we are able to do tomorrow. That’s the best way to determine a champion and that’s what we all want and are hoping for.”

Lydia Ko of New Zealand, who claimed the Silver Medal in the 2016 Olympics in Rio de Janeiro, made four birdies on the back nine in a bogey-free 66 and is five shots back in a tie for third with Hannah Green of Australia, who made an early bogey but played flawlessly the rest of the way in a 67, and Mone Inami of Japan, who had five birdies in a 68.

Ninth-ranked Nasa Hataoka of Japan made two birdies down the stretch to card a 67 and is seven down in a tie for seventh with first-round leader Madelene Sagstrom of Sweden, who finished at 71, and Nanna Koerstz Madsen of Norway, whose two late birdies salvaged a 72.

Second-ranked Jin Young Ko of South Korea birdied No. 17 to total 71 and is one more down in a tie for 10th with fourth-ranked Sei Young Kim, also of South Korea (68), Matilda Castren of Finland (68), Xiju Lin of China (69), Stephanie Meadow of Ireland (68) and Shanshan Feng of China (68), who won the Bronze Medal in Rio.

Fifth-ranked Danielle Kang of the U.S. struggled to a 74 and is in a tie for 34th that includes eighth-ranked Minjee Lee of Australia, who wound up at 73 and Lexi Thompson of the U.S., who finished at 69, while seventh-ranked Brooke Henderson of Canada is tied for 40th following a 71.