English Leads by 2 Over DeChambeau and Smith in WGC-FedEx St. Jude 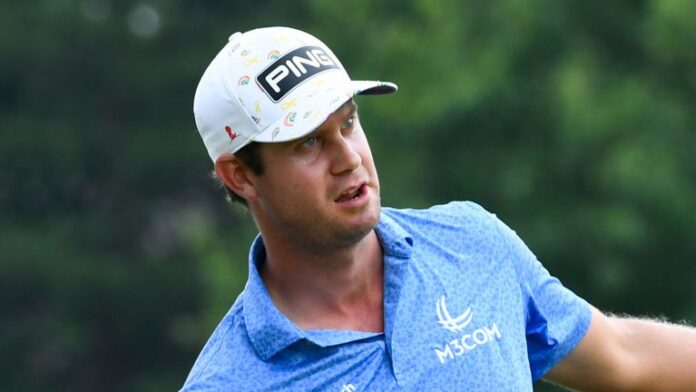 Harris English was pushed from behind but remained on top of the leaderboard.

English, who has led since opening with an 8-under-par 62, made two late birdies to cap a bogey-free 65 and holds a two-stroke lead over seventh-ranked Bryson DeChambeau of Clovis and Cameron Smith of Australia heading to the final round of the WGC-FedEx St. Jude Invitational at TPC Southwind in Memphis, Tenn.

“There’s a lot of good players behind me and my goal is just stick to my strategy and execute, and whatever happens, happens,” said English, who claimed the first of his four PGA Tour victories at TPC Southwind in 2013. “It was a slow start, but I made a (25-foot birdie) putt on eight, hit it close on nine and that kind of got the round going.

“I can’t control what everybody else is doing. I can’t really put a number out there, but if you play good golf out here, you can shoot seven- or eight-under. So who knows what it’s going to take (in the final round), but I’ve got to keep doing what I’m doing and we’ll see where it is after 18.”

English, who has won the Sentry Tournament of Champions and Travelers Championship this year, started round three with seven straight pars before making those birdies on the eighth and ninth holes, then added three more at Nos. 13, 16 and 17 to finish 54 holes at 18-under 192 after his second straight 65.

DeChambeau, who missed the Olympic Games Men’s Golf Tournament last week because he tested positive for Covid-19, rattled off five birdies on the back nine in a 63, while Smith birdied four of the last seven holes to complete a 65 after shooting 62 in round two.

“I just got into a rhythm on the back nine,” said DeChambeau, who won the 2020 U.S. Open and the Arnold Palmer Invitational in this super season. “I took advantage of the long holes with my swing, hit the ball in the fairway to give myself birdie opportunities instead of making bogeys.

“It was pretty nice and I’m very pleased. I hit a lot of fairways and greens to give myself birdie chances, even though I missed a couple, too. I just have to clean up a couple of things to give myself a chance to win tomorrow.”

Abraham Ancer of Mexico, coming off a tie for 14th in the Olympics, was right with English all day until making his only bogeys on the last two holes of a 67 and is four shots back in solo fourth, while Ian Poulter of England and Scottie Scheffler are one more down in a tie for fifth after they both shot 67.

Second-ranked Dustin Johnson, who has six WGC titles, posted a second straight 65 and is seven strokes behind in a tie for seventh with eighth-ranked Louis Oosthuizen of South Africa, who had three early birdies in a 68, Paul Casey of England, who carded a bogey-free 65, and rookie Will Zalatoris, who birdied two of the last four holes for a 67.

Fifth-ranked Justin Thomas, the defending champion, is tied for 17th after a 69 that included an eagle on the 16th hole, while third-ranked Collin Morikawa posted a 68 and is in a tie for 32nd that includes sixth-ranked Brooks Koepka, the 2019 WGC-FedEx St. Jude champion, who finished at 67.

Ninth-ranked Patrick Cantlay of Los Alamitos and UCLA had only one bogey in a 69 and is in a tie for 39th that includes 10th-ranked Viktor Hovland of Norway, who also wound up at 69, while fourth-ranked Xander Schauffele of La Jolla and San Diego State is tied for 61st following a 70.