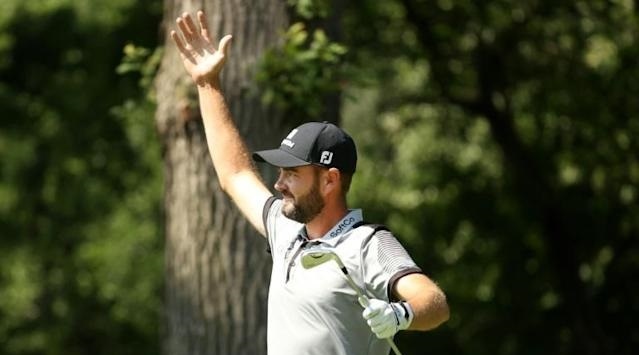 Joaquin Niemann of Chile shared the lead for the second straight day, this time with Troy Merritt, who got there thanks to a hole in one.

Merritt (pictured) aced the 11th hole on his way to a five-under-par 67, while Niemann carded a bogey-free 68 and they are tied for the top spot heading to the final round of the Rocket Mortgage Classic at Detroit Golf Club.

The roar of the crowd following the ace was much appreciated by Merritt, who tied for eighth in the 2020 Rocket Mortgage Classic, when fans were not allowed on the course because of the Coronavirus pandemic.

“It’s awesome to have the fans back out here, whooping and hollering the good shots,” said Merritt, whose two PGA Tour victories came in the 2015 Quicken Loans National and the 2018 Barbasol Championship. “We had time to settle down before the next tee shot.

“The big thing is when you get out in front, don’t go back to the guys behind you, make them come and get you. I know that we’re tied now, so the mindset (in the final round) will be to make a few birdies but don’t give any away, make them work to come and get us, and hopefully it’s good enough (to win) in the end.”

The 30-year-old Merritt made his first hole in one on the PGA Tour after 252 events, one-hopping his tee shot with a 5-iron into the cup from 218 yards at No. 11 after making four birdies on the front nine.

Merritt followed with his only bogey on the 12th hole and then finished with six straight pars to record a 54-hole total of 14-under 202.

Niemann, 22, the only player in the field without a bogey through three rounds, pulled even with Merritt by making a one-foot birdie putt on the 17th hole, and remained there by sinking a five-foot par putt on the last.

“Everybody’s going to have their own moment and I had my moment pretty early,”

said Niemann, whose eight pro victories include the 2019 Military Tribute at the Greenbrier, when at 20 he became the first player from Chile to win on the PGA Tour. “You’ve just got to be patient. But I took it pretty easy. I just wanted to keep going. I knew that when everything went well, I would win again, so I just didn’t want to put myself in that stress.

“Obviously the leaders, we’re all pretty close, right next to each other, so I know that I need to go low tomorrow to give myself a chance to win.”

Left-hander Hank Lebioda collected seven birdies in a 66 that was the low score of the day and is one stroke back in a tie for third with Cameron Davis of Australia, who had three birdies on each nine in a 67, while Brandon Hagy of Westlake Village and Cal birdied three of the first four holes to kick-start a 68 and is two shots behind in solo fifth.

Ninth-ranked Patrick Reed is tied for 58th after a 70, and PGA champion Phil Mickelson wound up at 72 for the second straight day and is tied for 70th.