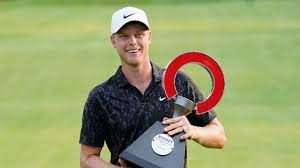 Cameron Davis of Australia provided the fireworks on the Fourth of July.

The 26-year-old Davis went eagle-birdie on the last two holes of regulation and then claimed his first PGA Tour victory with a par on the fifth playoff hole to turn back Troy Merritt in the Rocket Mortgage Classic at Detroit Golf Club.

Joaquin Niemann of Chile, 22, also was in the playoff, but dropped out after hitting his approach shot with a wedge over the 18th green and making his only bogey of the tournament on the first extra hole.

“It was hectic from the 17th hole on,” said Davis, who had and missed a putt to win on every playoff hole, and didn’t survive until Merritt missed a six-foot par putt on the fifth one. “I couldn’t make a putt in the playoff, but I kept on trying. I tried to put it as much out of my mind as I could and hit every shot for what it was worth. As simple as that is to say, it’s so hard to do when the pressure is on like that.

“I hit the ball well all day and made some putts, earlier, and I just kept putting the ball in play to give myself chances to win, and it finally happened.”

Davis, whose only other pro victories came in the 2017 Emirates Australian Open and the 2018 Nashville Golf Open on what is now the Korn Ferry Tour, holed a bunker shot from 50 feet for an eagle on the 17th hole and a six-foot par putt on the 18th to cap his second straight 5-under-par 67, finishing at 18-under 270.

Merritt, 35, whose two PGA Tour victories came in the 2015 Quicken Loans National and the 2018 Barbasol Championship, caught him with four birdies in five holes through No. 17 in a 68, while Niemann, who won the 2019 Military Tribute at the Greenbrier, birdied the 16th and 17th holes in another 68.

“I played well all week and gave it all I had,” said Merritt, who made three par putts and an birdie to keep the playoff going. “It gave it my best, but unfortunately it was not quite enough and I came up just short.

“Hats off to Cam, he hit all the greens in regulation during the playoff and had putts to win, while it seemed like I was always scrambling. I tried to put my best stroke on that last putt, but it just didn’t go in.

“But I played well and feel like my next win is right around the corner.”

Niemann and Merritt were tied for the 54-hole lead.

Said Niemann: “I played well, but the first bogey I made proved to be costly and that’s just the way it goes. I’m playing well right now and looking forward to the tournaments I have coming up.”

Alex Noren of Sweden collected nine birdies in a 64 that was the low score of the day and finished one stroke back in a tie for fourth with Hank Lebioda, who carded a bogey-free 68, while Bubba Watson also shot 64 by making a seven-birdie putt on the last hole and was two strokes back in a tie for sixth with Brandon Hagy of Westlake Village and Cal, who had three late birdies in a 68.

Mark Anderson also had three birdies down the stretch while closing with a 66 and was one more down in a tie for eighth with Sungjae Im of South Korea and Seamus Power of Ireland, who both finished at 67, and Kevin Kisner, who wound up at 68.

Ninth-ranked Patrick Reed tied for 32nd after a bogey-free 67, and and PGA champion Phil Mickelson posted a third straight 72 to tie for 74th.

Last week, Harris English beat Kramer Hickok with a birdie on the eighth playoff hole to win the Travelers Championship.