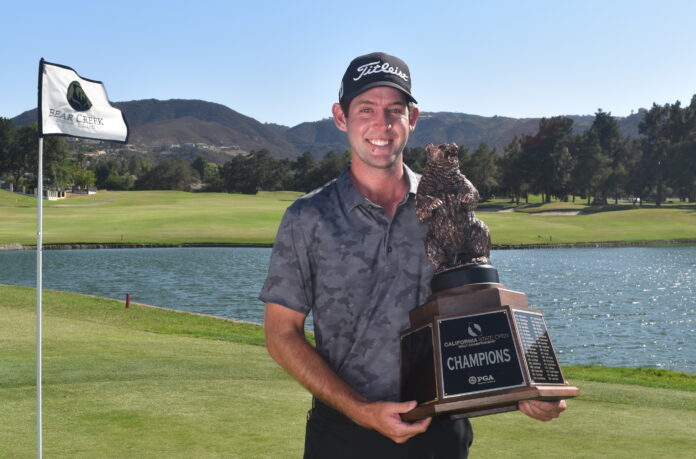 Matt Wilson of Cypress chipped in from 20 feet for a birdie on the ninth playoff hole to beat Christopher Evans of Bermuda Dunes and win the 121st California State Open at Bear Creek Golf Club in Murrieta.

After Wilson chipped in, Evans had a chance to prolong the playoff, but missed his 15-foot birdie putt from the fringe after they battled virtually shot-for-shot for the first eight extra holes.

Both players three-putted for bogey the eighth playoff hole and moved on for one more.

“The chip on the final hole checked and I was shocked it went in to seal the deal,” said the 25-year-old Wilson, who went to Cal State Fullerton and plays on the Golden State Tour. “I can’t wait to come back next year to defend my title.

“I don’t have a lot of experience in playoffs (it was his second), but today certainly makes up for it. When I got hot there on my back nine, I didn’t take a look at the scoring to see where I was, and just focused on running my own race.

“After the three-putt I was grateful to still have life and another hole. Being able to close out a tournament is something I’ve been working on.”

The tournament was canceled last year because of the Coronavirus.