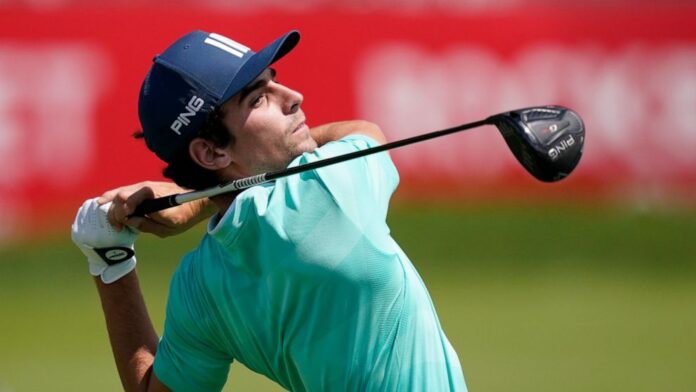 Joaquin Niemann of Chile and Tom Lewis of England have proven they can win, and they are positioned to do it again.

Niemann (pictured) and Lewis both posted bogey-free rounds of 3-under-par 69 and share a one-stroke lead over Max Homa, Troy Merritt and Chris Kirk midway through the Rocket Mortgage Classic at Detroit Golf Club.

“Right now everything is pretty good,” said the 22-year-old Niemann, who has won eight times as a pro, including the 2019 Military Tribute at the Greenbrier on the PGA Tour, and also lost on the first hole of a playoff to Harris English at the Sony Tournament of Champions in January. “I think (the putter is) the best part of my game right now.

“We’ve had a lot of rain this week, so the course has played soft, but it’s not supposed to rain on the weekend, so I expect the greens to get a little firmer. But I’m playing well and I like my chances. It’s going to be fun.”

Niemann sank a seven-foot birdie putt on the 17th hole and capped his bogey-free 69 with a six-foot par putt to take the early clubhouse lead.

Lewis came along and matched it late in the day, highlighted by a 22-foot birdie putt on the fourth hole and a nine-foot par putt on his last hole, as they both wound up at a bogey-free 10-under 134 after opening with 65s.

“I was saying to my caddie, John, it would be nice to go up-and-down and go bogey-free for two rounds,” said Lewis, 30, who has four pro victories, including the Portugal Masters on the European Tour in both 2011 and 2018, and the 2019 Korn Ferry Tour Championship. “It’s always nice doing that.

Homa, of Valencia and Cal, birdied the last four holes in a bogey-free 65 to tie for third with Merritt, who collected six birdies in a 68, which Kirk matched while making five birdies.

Russell Knox of Scotland made five birdies on the back nine in a 65 and is two shots back in a big tie for sixth with Pat Perez of San Diego (69), Cameron Davis of Australia (68), Sean O’Hair (66), Brandon Hagy of Westlake Village and Cal (71), Kevin Kisner (69), Richy Werenski (68) and first-round leader Davis Thompson, who followed his 63 with a 73.

Ninth-ranked Patrick Reed and PGA champion Phil Mickelson both shot 72 and made the cut on the number in a tie for 63rd.

Sixth-ranked Bryson DeChambeau, the defending champion who parted ways with longtime caddie Tim Tucker on the eve of this tournament, finished at 72-71—143 and missed the weekend by two strokes.

“I hate golf,” DeChambeau said at one stage of his round.

Masters champion Hideki Matsuyama, who opened with a 70, tested positive for Covid-19 and withdrew from the tournament before the start of the second round.