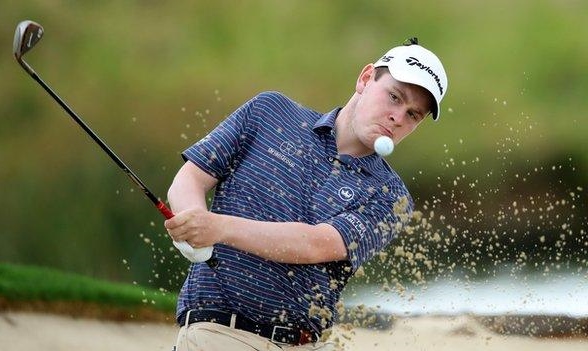 Left-hander Robert MacIntyre of Scotland pulled off the surprise of the day, even though top-seeded Dustin Johnson hit two of the shots of the day.

Johnson (1-0-1), who was 2 down with three holes to play, sank an 11-foot eagle putt on the 16th hole and a 17-footer for birdie on the next hole to salvage a halve with No. 41 MacIntyre (1-0-1) on the second day of Group Play in the WGC-Dell Technologies Match Play Championship at Austin Country Club in Austin, Texas.

“You know, he holed putts when he had to hole putts,” said MacIntyre (pictured), who has won twice on the European Tour and tied for sixth in the 2019 Open Championship at Royal Portrush. “He does that to win numerous majors.

“I’m young. I’ve got plenty of time ahead of me. Obviously I was dying to win that match. I was in such a great position to do it. But he threw everything at me, and I can be proud of finishing there all square … but obviously inside I’m a little disappointed not to win.”

Kisner beat Kuchar in the final two years ago, and last year’s tournament was canceled by the Coronavirus pandemic.

“It was one of those rounds, one of those matchups, where I don’t think we really had our best stuff,” said the surprising Poston, who beat Homa on the first day. “We definitely gave each other some easy wins throughout the match, but I felt like I did a pretty good job of staying aggressive and just trying to win holes when I had my chances and I was able to do that.”

No. 10 Patrick Cantlay of Los Alamitos and UCLA (2-0) is in charge in Group 10 after a 1-up victory over No. Carlos Ortiz of Mexico.