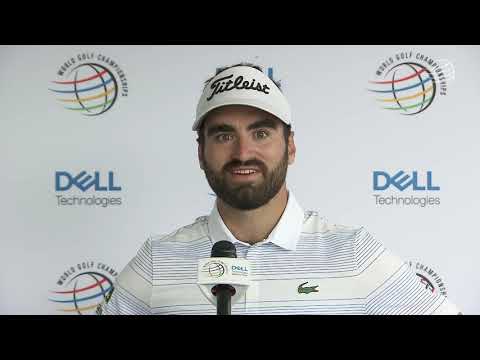 Unheralded Antoine Rozner of France pulled off the biggest upset in a day that was full of surprises in the first round of Group Play in the WGC-Dell Technologies Match Play.

No. 58-seeded Rozner (pictured) built a 3-up lead after 12 holes and then sank a seven-foot birdie putt on the 18th hole to cap a 2-up victory over No. 5 Bryson DeChambeau at Austin Country Club in Austin, Texas.

“I think I’m just trying to play good golf and it’s the strongest field I ever played against, so I’m enjoying it,” said Rozner, who sank a 60-foot birdie putt on the last hole to win the Qatar Masters 10 days earlier to climb into the top 64 in the World Golf Rankings and qualify for this event. “I had a lot of fun today out there and, yeah, I’m very happy.

“I was just trying to put up a good round of golf and I think I did that very well, especially on the front. I didn’t make any mistakes on the front and I think being 3 up after 12 holes was a good enough lead. I actually was feeling a little bit nervous on the back nine, but, yeah, being 3 up was good enough.

“In match play anyone has a chance, so I don’t think it was an upset.

The 28-year-old Rozner, who played at University of Missouri-Kansas City, also won the Golf in Dubai Championship last December and was playing in his first event on the PGA Tour.

The 64 players in the tournament will play a round-robin against the other three in their group over the first three days and the 16 who survive will move on to sudden-death elimination play to determine the eventual champion.

Rozner is leading Group 5 because No. 21 Tommy Fleetwood of England halved his match with No. 25 Si Woo Kim by holing a 10-foot birdie putt at No. 18.

No. 52 Matt Kuchar, who won the 2013 WGC-Match Play, routed No. 2 Justin Thomas, who was coming off a victory in the Players Championship, 6 and 5.

“I knew I was in for a tough match against JT, I knew had my hands full, but I’ve been working hard the last two months and started feeling the fruits of the labor paying off earlier this week,” said Kuchar, who claimed the last of his nine PGA Tour victories in the 2019 Sony Open in Hawaii. “I had a great day.

“I’m not sure many people would have been picking me this week, and especially not today, but I got off to a good start, made only one bogey all day and really felt good, like my old self out there.”

No. 63 J.T. Poston won the last two holes to halve his match with No. 4 Collin Morikawa of La Canada Flintridge and Cal; No. 57 Andy Sullivan of England held a 3-up lead after 10 holes but No. 6 Xander Schauffele of La Jolla and San Diego State rallied to salvage a halve; No. 55 Bubba Watson, the 2018 winner, halved with No. 7 Patrick Reed, who won the last two holes, and No. 51 Matt Wallace sank a four-foot birdie putt at No. 18 to tie No. 8 Tyrrell Hatton in an all-English battle.

In another upset, No. 60 Ian Poulter of England trounced his Ryder Cup teammate, No. 11 Rory McIlroy of Northern Ireland, 6 and 5, by taking a 2-up lead at the turn and winning the next four holes, the clincher coming when McIlroy chipped across the green and into the water at No. 13.