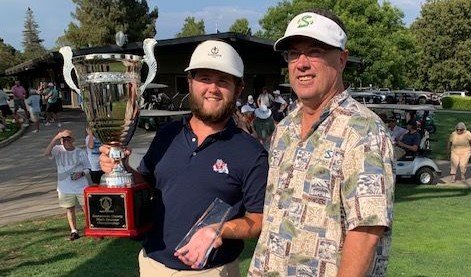 Matthew Sutherland of Carmichael made a five-foot birdie on the final hole to win the 57th Annual Sacramento County Men’s Championship by one stroke over Sam Sommerhauser of Rocklin and Taylor Knoll of Rancho Cordova at Ancil Hoffman Golf Course in Sacramento.

Sutherland (pictured with his father, David Sullivan) claimed the title that his father won in 1984.

Knoll had a 25-foot eagle putt on the last hole to force a playoff but ran it just past the edge of the hole and tapped in for a birdie.