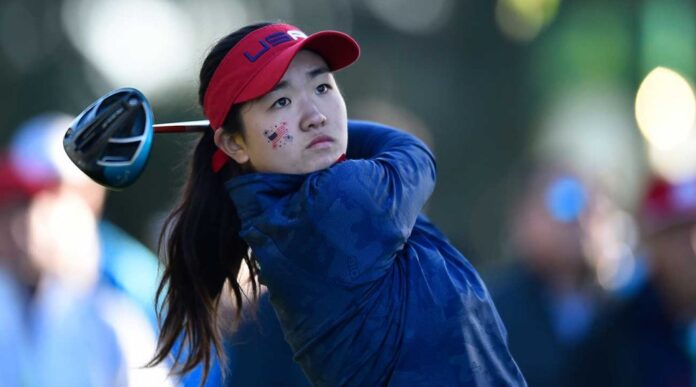 Rose Zhang of Irvine, Rachel Heck of Stanford and Allisen Corpuz of USC, the top three Americans in the Women’s World Golf Rankings, are the first players named to the 2021 United States team for the 41st Curtis Cup Match against Great Britain and Ireland on Aug. 26-28 at Conwy Caernarvonshire Golf Club in Conwy, North Wales.

The remaining five players for the USA will be chosen by the United States Golf Association’s International Team Selection and will include the winners of the 2021 U.S. Women’s Amateur Championship on Aug. 2-8 at Westchester Country Club in Rye, N.Y., and the 2021 McCormack Medal, if they are Americans.

“Rose, Rachel and Allisen have all had unbelievably impressive years, with notable accomplishments at the junior, amateur and collegiate levels, and we’re honored and fortunate to have them a part of the USA Team.”

The 18-year-old Zhang (pictured), the top-ranked women’s amateur in the world, is the reigning champion in the U.S. Women’s Amateur Championship and the U.S. Girls’ Junior Championship, winning the latter earlier this month.

Zhang, who will be a freshman at Stanford in the Fall, captured the Rolex Girls Junior Championship, the Ping Invitational and the Rolex Tournament of Champions last year, and tied for third in the Augusta National Women’s Amateur earlier this year.

Heck, 19, is a Stanford sophomore from Memphis, Tenn., who is ranked second in the world, was named winner of the 2021 Annika Award as the top women’s college golfer after becoming the third player to sweep Pacific 12 Conference Championship, the regional title (the Stanford Regional) and NCAA Championship, joining Annie Park of USC and Marisa Baena of Arizona.

Heck’s 69.72 scoring average over 25 rounds is the lowest in NCAA women’s golf history.

In addition, Heck was a five-time AJGA All-American and a two-time USA Today Player of the Year, and was the stroke-play medalist in the U.S. Women’s Amateur Championship last year before losing in the Round of 16.

Corpuz, 23, is a recent USC graduate from Kapolei, Hawaii, who is No. 12 in the Women’s World Golf Rankings. She won the San Diego Invitational and the Gold Rush among seven top-10 finishes this year and led Stanford with a 71.57 stroke average while being named first team All-American by Golfweek and the Women’s Golf Coaches Association.